Insulin-producing cells carried in protective magnetocapsules are tracked by MRI

Iron-based ’magnetocapsules’ of insulin-producing cells could help doctors use cell transplants to treat type I diabetes.

The disease is caused when the immune system destroys insulin-producing beta cells in the pancreas. Without insulin, blood sugar levels become dangerously high, so regular insulin injections are needed. But treating the disease with implanted beta cells would be preferable, as they continually adjust insulin levels to regulate blood sugar.

While attempts have been made to transplant beta cells to treat people with type I diabetes before, results have been mixed. In 80 to 90 per cent of cases, the implanted cells stop producing insulin within five years, for reasons yet to be discovered. Part of the problem is an inability to track the cells once they’re inside the body.

A team of scientists at Johns Hopkins University in Baltimore, Maryland, US, have now developed a magnetic casing to protect transplanted beta cells. The capsules have small pores, which let the insulin out into the body but cloak the cell from the recipient’s immune system, preventing rejection. The team can also follow the fate of their magneto-encapsulated cells because they are visible to magnetic resonance imaging (MRI). 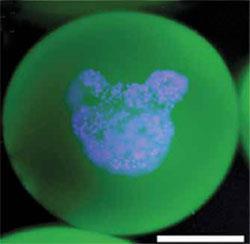 ’We’re really excited because we can track where we put the cells, and make sure their protective housing stays intact and that the cells don’t move,’ said Aravind Arepally, assistant professor of radiology and surgery at John Hopkins. ’This could solve the mystery of why current transplantation techniques work only for so long.’

The team encapsulated the beta cells in a mixture of Feridex, a clinically approved, iron oxide-containing MRI contrast agent, and alginate, a gum isolated from algae. The outer shell hardens to create a pellet about a tenth of a millimetre across, containing 500 to 1000 cells. In trials of the encapsulated human beta cells in pigs, the scientists could accurately place the cells in the liver using real-time MRI fluoroscopy imaging. Three weeks after implantation, MRI and blood tests showed the capsules remained in place, and that the cells were still producing insulin.

Jo Brodie, Islets Project Coordinator at Diabetes UK, said: ’If this research can be safely applied to people it could bring a huge benefit in allowing doctors to monitor the health of the transplanted cells.   At the moment this isn’t really possible as there are no markers - for example, urinary or blood products - that indicate islet damage.’

’Combining this with encapsulation technology will hopefully minimise rejection episodes in the first place, and could provide an additional platform for stem cell transplantation in the future,’ she added.