The precise workings of cytochrome c oxidase (CcO), an enzyme that is crucial for all aerobic life, have been unveiled.

CcO is the final link in a biochemical chain that turns food and oxygen into adenosine triphosphate (ATP), which is the principle store of chemical energy for metabolism. The enzyme is found in mitochondria, the powerhouses found in almost every cell, where electrons from glucose are passed along a chain of protein complexes until they reach CcO, which uses them to convert an oxygen molecule into two molecules of water. In doing so, it pumps four protons - hydrogen ions - across the membrane, building up a reservoir that ultimately helps to make ATP.

CcO’s action depends on two pairs of transition metal ion sites, each consisting of a porphyrin-bound iron atom, known as a haem group, coupled with a copper atom. A nearby phenol group from a tyrosine amino-acid residue has also been implicated in the reaction. The result is that oxygen reduction to water occurs in one step with extremely high efficiency.

However, if fewer than four electrons are delivered to oxygen, then highly toxic partially-reduced oxygen species, such as peroxides and superoxides, are produced in large amounts. These reactive compounds have been implicated in cancer, heart failure, and Alzheimer’s disease.

’How all four electrons add to oxygen has always been a bit of a mystery,’ said James Collman of Stanford University, California, US. ’Yet very few people study it because it is quite complex.’ Although electrons are delivered to CcO one at a time, they are consumed too quickly to study individually.

Collman and his colleagues have now synthesised (in 32 steps) a molecule that mimics the CcO active site. Like the real thing, it has three redox centres: a synthetic iron-containing haem with an appended tris-imidazole-complexed copper(II) ion positioned directly over it, and a phenol group attached to one of the nearby imidazole groups. The molecule rapidly reduces oxygen to water. 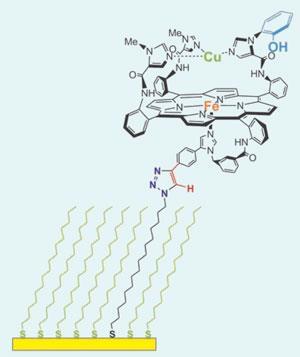 But the team also wanted to know exactly how crucial each of the model’s reaction centres were to the overall reaction. So they attached their model molecule to a gold electrode via a long tether molecule (see picture), which slowed the flow of electrons enough to mimic how the real CcO’s active site is replenished with electrons after rapid oxygen reduction. The model still worked, suggesting both the copper and the phenol centres are implicated in CcO’s efficient reduction of oxygen to water.

As confirmation, the Stanford team made versions of their model with the active centres systematically removed. Under the same conditions of slow electron flux from the electrode, these models reduced oxygen less selectively, producing large amounts of partially reduced oxygen species that eventually chopped up the model molecule.

’Previous attempts to study this enzyme were like taking still photos of the active site,’ Collman told Chemistry World. ’What we have done is shoot a movie’.

Adrian Mulholland, an enzyme modeller from the University of Bristol, UK, agrees. ’Under steady state conditions, the Stanford team’s model seems to mimic the properties of cytochrome oxidase very well,’ he said. ’This fully functioning biomimetic system is highly significant.’