Big five control publishing of more than 50% of global academic papers, rising to over 70% in chemistry 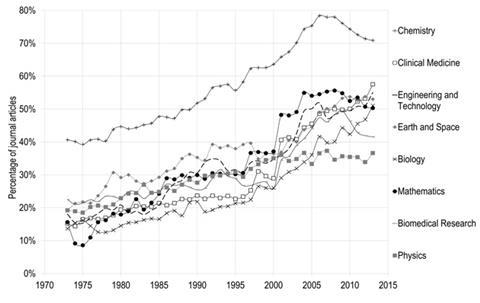 Five of the largest publishing houses control more than half of the global market in academic papers in the natural and medical sciences (NMS). And the dominance of the big five in chemistry publishing is particularly notable, according to a new analysis by the University of Montreal in Canada. The study reveals that about 40% of chemistry papers were published by the five major NMS publishers in 1973, but that reached nearly 80% in 2006 and then fell to just above 70% by 2013. The researchers say that these findings are unsurprising, given that a major chemistry publisher – the American Chemical Society (ACS) – is one of the big five.

When it comes to all academic fields, three publishers accounted for more than 47% of all papers published in 2013 – Reed–Elsevier, Springer and Wiley–Blackwell. The ACS and Taylor & Francis publish a smaller proportion of these papers. From 1990 to 2013, the ACS saw a 5% decrease in publication of NMS research papers to 3.4%, while Taylor & Francis increased its share almost five-fold to 2.9%.

Vincent Larivière, lead author and an information scientist at Montreal, notes that these large commercial publishers have huge sales, with profit margins touching 40%. ‘While it is true that publishers have historically played a vital role in the dissemination of scientific knowledge in the print era, it is questionable whether they are still necessary in today’s digital era,’ he said.

Larivière’s team examined 45 million manuscripts indexed by Web of Science between 1973 and 2013, and found that some research disciplines – like biomedicine, physics and the arts and humanities – were less dependent on commercial publishers. However, more than two-thirds of the journals in chemistry, psychology, social sciences and the professional fields are published by one of the big five.

Meanwhile, in the social sciences 70% of papers were published by the big five, while only 20% in the humanities came from these publishers. The NMS disciplines were somewhere in between, mainly because of the strength of their scientific societies, such as the ACS in chemistry or the American Physical Society in physics, Larivière says.

The top publishers increased their share of scientific output primarily thanks to the launch of new journals and acquiring existing journals, according to Larivière. He notes that many journals were owned by small societies that did not have the resources to transition from print to digital, so big publishers took them over.

The Royal Society of Chemistry (RSC), which publishes six out of the top 20 multidisciplinary chemistry journals, has seen substantial growth in market share and significant increases in its journals’ impact factors over the last several years. However, the organisation says that this growth hasn’t been achieved by acquisitions but rather through the services it offers as a not-for-profit publisher, as well as its reputation for customer service and fairness.

The Montreal team suggest that several factors help to explain the profitability of this industry, including the fact that the publishers do not have to pay for the articles or their quality control, which are provided free of charge by the scientific community. Furthermore, they said the publishers have a monopoly on the content of journals, which can be sold a single paper at a time.

Larivière says the prices publishers charge universities for scientific journals are increasing by 5 or 7% every year. In fact, his research was sparked by the fact that the University of Montreal library is no longer able to subscribe to as many journals as it once did.

‘Given the annual increases, it is kind of unsustainable,’ Larivière says. He adds that academic libraries are increasingly dependent on big publishers but also increasingly unable to pay what they are charging. Bundled subscriptions also mean that libraries pay for journals that they don’t want or need. Larivière points out that half of the journals that Montreal has subscribed to had no downloads over the past five years.

However, there are signs of dissent in the scientific community. Larivière points to ’The Cost of Knowledge’ campaign, launched in 2012, that encourages researchers to stop submitting to, reviewing for or editing Elsevier journals as a protest against its business practices. In addition, some universities have stopped negotiating with major publishers and have threatened to boycott them, while others have cancelled their subscriptions.

Peter Murray-Rust, a chemist and keen advocate of open access at the University of Cambridge, UK, says the mainstream science, technical and medical (STM) publishing industry has been ‘massively antagonistic’ toward new developments that could ‘liberate information’. The dominance of a few major publishers in these fields has created ‘a monoculture which is determined by commercial principles, rather than by scientific ones,’ he tells Chemistry World.

‘We are in danger of being controlled by a small number of essentially totally unaccountable publishing organisations,’ Murray-Rust warns. He stresses that a number of these are private companies that are not even accountable to shareholders.

‘In an era of globalisation and large-scale technological implementations, there are benefits to spreading infrastructure investment and maintenance across a broad spectrum of products,’ he tells Chemistry World. ‘In digital publishing this has resulted in a diverse market of providers, and faster and more robust delivery of information to readers.’ Furthermore, Tagler states that commercial publishers are accountable to many, including the authors whose work they publish and the societies whose journals they publish.

The ACS agrees that the global marketplace for STM information is well served by a diverse range of publishers. ‘Even in the midst of mergers and acquisitions, it is an industry that is sustained by investment in and innovation with digital publishing technologies – and that embraces and adapts to competition from new entrants,’ states ACS spokesperson Glenn Ruskin.