Chemists arrive at the island of stability

Despite predictions of exotic properties, 'superheavy' element 112 behaves like one of the family

Despite predictions of exotic properties, ’superheavy’ element 112 behaves like one of the family, say radiochemists in Switzerland.

Robert Eichler, Heinz G?ggeler and colleagues at the Paul Scherrer Institute have confirmed the existence of Ununbium - as element 112 is provisionally known - and shown it behaves like mercury, its closest neighbour on the periodic table.

Superheavy elements like 112 were first postulated in the 1960s to exist on an ’island of stability’. Scientists soon set out in search of this idyllic-sounding spot, first looking for the element among supernovas. But the first sightings of 112 were made inside particle accelerators, by physicist Sigurd Hofmann and colleagues at the Institute for Heavy Ion Research (GSI) in Darmstadt, Germany, in 1996.

’The physicists provided no information on the chemical properties of 112 - only that it exists,’ said G?ggeler. Theories predicting the behaviour of these elements were conflicting; the high positive charge of a nucleus packed with protons meant some of the orbiting electrons would be travelling close to the speed of light, affecting the arrangement of electrons around the nucleus. Would this make 112 a highly unreactive element, inert like a noble gas? Or would 112 behave more like mercury, the element it sits below in the periodic table? 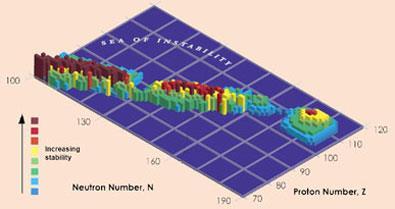 The mysterious island of stability really does exist

’How do you design an experiment to disentangle whether 112 is mercury-like or gas-like?’ said G?ggeler. ’We know mercury makes very strong bonds with other metals, including gold, to form amalgams.’ So the team built a detector array made completely from gold, with a temperature gradient from +30 degrees to -180. In preliminary tests, mercury stuck to the very first detector, while the noble gas radon travelled almost to the last.

Eichler, G?ggeler and colleagues made 112 and tested its properties by firing a calcium ion beam at plutonium. On two occasions, this process gave complete fusion of the two nuclei, which decayed to give 112. ’The two 112 atoms were detected only slightly below mercury,’ said G?ggeler. ’So, surprisingly, 112 is just an ordinary member of the group,’ he said.

’People were sceptical [of 112’s discovery] until recently, as other labs couldn’t confirm the results,’ said Andreas T?rler, who investigates superheavy elements at the Technical University Munich, Germany. ’Now, Eichler’s results lend credibility to the discovery, and credibility that the island of stability does exist. Everybody is very excited, as now we can start to do some chemistry,’ he said.

Yet officially, element 112 still does not exist. Since Hofmann’s fist claims for the discovery of element 112 in 1996, Iupac (the International union of pure and applied chemistry) has been waiting for further results before confirming its discovery. ’I’m quite convinced Iupac will now recognize this element,’ said T?rler. ’This new chemistry doesn’t have an influence on naming 112, but the team could go on to name 114. But having only seen two atoms, you can’t really say 112 has been full investigated chemically!’

Paul Karol, who sits on a working group for Iupac considering claims for the discovery of superheavy elements, declined to comment on Eichler’s results. ’The competing claims for discovery of 112 are under critique by a joint group of "experts" right now and any revelation of our preliminary position would be most inappropriate,’ he said.