While China’s pharmaceutical industry is experiencing rapid growth, a boom in counterfeit drugs is costing human lives and eroding the public’s confidence in medical products. 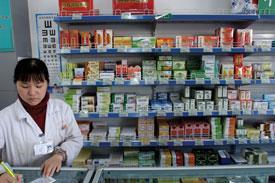 ’Among 32 drugstores in Nanjing [capital city of East China’s Jiangsu Province] investigated by me in the past weeks, 22 are selling counterfeit drugs and health foods,’ claimed Gao Jingde, a fake-drug investigator based in Shanghai.

A former senior employee in a Shanghai pharmaceutical trading firm, Gao began his investigations three years ago after he suffered from taking a counterfeit liver medicine.

National figures on fake drugs are unavailable, but according to a 2006 report released by London-based International Policy Network, between 200 000 and 300 000 people in China die from counterfeit or substandard medicine in China each year. Another report, Prescription Drug Counterfeiting, released by Dublin, Ireland-based company Research and Markets on 1 May, says that China has become a major source of counterfeit drugs in the international market.

Despite frequent media stories in China reporting the success of the State Food and Drug Administration (SFDA) and its local branches in cracking down on counterfeit drug makers, Gao says he has growing concerns that fake drugs are expanding from rural markets to bigger drugstores in major Chinese cities.

Gao has also investigated drugstores which enjoy the support of public medical insurance, and found that four out of 15 carried fake medicines. ’These drugstores are equipped with more professional physicians who should be able to easily detect the fakes,’ Gao told Chemistry World.

Commercial corruption and poor performance of drug regulators should be blamed for the prevalence of fake drugs, says Gao, adding that he has reported all the fake drug sellers he discovered to Nanjing Food and Drug Administration, but that none of the offending drugstores have been punished. ’They simply do not respond to my reports and follow-up enquiries,’ Gao said.

Although most Chinese drugs are generics whose production costs are quite low, many domestic pharmaceutical companies have successfully registered their medicines as highly priced new medicines, thanks to China’s loose regulation on new drugs.

Hou Yiliang, an official at the SFDA, refutes Gao’s accusations against drug regulators. ’We have studied and implemented various measures against fake drugs, but the high profits of fake [drug] making still stimulate people to do so,’ he said.

Yang Yue, an associate professor of pharmaceutical regulations at Shenyang Pharmaceutical University, in northeast China’s Liaoning Province, points out some legal loopholes. ’Currently the relevant Chinese laws only stipulate penalties up to two times of the sales volumes of fake drugs. This is too low as compared with the tremendous profits of the illicit behaviour,’ he said.

Henk Bekedam, World Health Organization representative in China, suggests the huge numbers of pharmaceutical companies and drug sellers in China provide many channels for fake drugs to be distributed.

’China needs to develop a system to accredit each of its 5000 Chinese pharmaceutical manufacturers and 12 000 drug wholesalers to reduce the chances for fakes to enter the market,’ Bekedam told Chemistry World.

Bekedam says some big pharmaceutical companies’ reluctance to publicise information on fakes of their medicines - from fear of damaging their reputation - also increases the difficulty for thorough investigation.

’Fighting fake drugs is a long term task. It needs an active involvement by stakeholders like pharmaceutical companies, and effective mechanisms developed by the government to monitor each step of drug’s life cycle,’ he concluded.