Health-related headlines often cite coffee as either a caffeinated curse or cure-all, with lines such as ‘x cups of coffee a day could lower or raise your risk of disease y’. But a new study into the caffeine and caffeoylquinic acid (CQA) content of various European coffees has again shown the huge variety in what ‘a cup of coffee’ means chemically, and how easy it can be for pregnant women to exceed the recommended 200mg of caffeine a day.1

In a non-funded project – ‘curiosity driven research,’ is how group leader, Alan Crozier from the University of Glasgow, UK, describes it – the team measured the caffeine-to-CQA ratio in over 100 espressos. This expanded their previous study on coffees in Scotland.2 Crozier says a co-worker’s home town in Italy yielded the most consistent cups of coffee of the project. What with this, and research group member Iziar Ludwig’s trips back to Spain, there was no shortage of brews to analyse.

Results showed that the caffeine-to-CQA ratio in espressos ranged from 0.7–11, depending on the preparation conditions. With serving volumes from 13–104ml, it’s no wonder that Crozier says ‘cup of coffee is an exceedingly variable unit. To estimate health benefits using cups may be very difficult,’ – and inadvisable in epidemiological studies.

But what are CQAs? Beans contain various (poly)phenols, including 3-, 4- and 5-O-caffeoylquinic acids, the main phenolic compounds in coffee. Epidemiological studies have suggested the link between the lower risk of type 2 diabetes, cardiovascular diseases, and endometrial and hepatocellular cancer in habitual coffee consumers might be due to the presence of CQAs in coffee. They sound like super-compounds, but that’s a big ‘might’, and research continues. 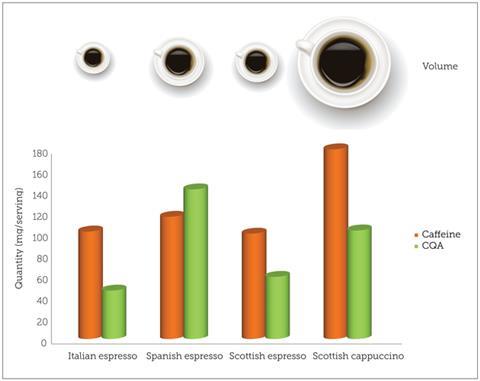 Whilst the biological effects of CQAs are uncertain, one thing we do know about them is they are more sensitive to roasting than caffeine. The bean or blend also affects the caffeine-to-CQA ratio. Arabica and Robusta are the most common bean types and the latter contains twice as much caffeine as the former.

Tim Bond of the UK Tea Advisory panel suggests that ‘where preparation method can significantly impact composition, more information could be provided at the point of sale to allow consumers to make informed decisions.’