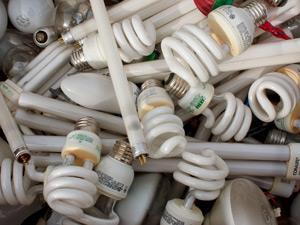 As part of ongoing research into critical metal reuse and recycling, chemical engineers have teamed up with chemists to develop a simple photochemical method for separating vital rare earth metals, europium and yttrium.1

Rare earth elements are crucial for modern technologies such as batteries, magnets and consumer electronics, but their similar chemical properties make them difficult to separate. Currently only China performs the extended series of solvent extraction steps needed to produce significant amounts of pure metals from mixed ores. Development of cleaner and less intensive separation methods would remove a barrier to worldwide recycling and production of rare earths.

Both elements exist as trivalent (Eu3+ and Y3+) ions in solution, but europium is also stable in the divalent state (Eu2+). Absorbing light of the correct wavelength reduces Eu3+ to Eu2+, which can then be precipitated out of solution as europium sulfate. For artificial Eu–Y mixtures, the Leuven team removed nearly all of the europium, and almost no yttrium, using a low pressure mercury lamp. 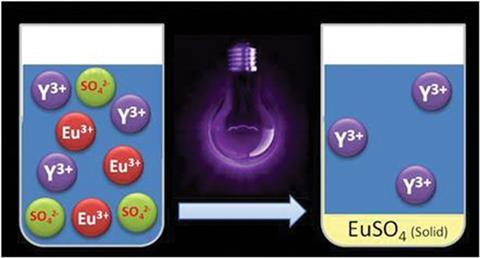 The process also uses isopropanol as a scavenger to remove hydroxyl radicals that oxidise Eu2+ back to Eu3+, instead of the more common but harmful formic acid.

Rare earth element researcher Jean-Claude Bünzli, from the Swiss Federal Institute of Technology, Lausanne, says that this in an improvement on previous work: ‘[they are] revisiting a photo-reduction process proposed in the 1980s by Chinese researchers2 and turning it into a more environmentally friendly process, in particular in avoiding the use of formic acid as scavenger.’

The team also successfully separated a real world industrial sample, albeit with a reduced europium recovery of 50%. They are now working to improve on this, as well as experimenting with alternative low energy light sources such as light emitting diodes. Ultimately, they hope to find methods for photochemically reducing other rare earth metals to process further waste materials or even raw ores.