Scientists in Belgium have developed a simple and environmentally-benign method for recovering precious metals from metal wires and spent automotive catalysts. Using highly-concentrated aluminium nitrate and aluminium chloride solutions, they were able to dissolve both gold and platinum group metals, and then precipitate out the pure metals, allowing them to potentially be recycled and reused. 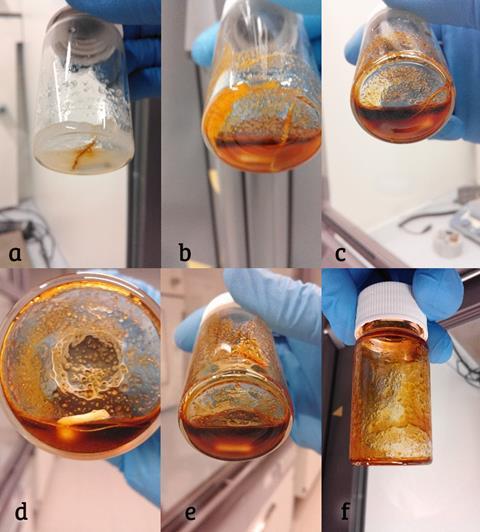 Metals like gold, platinum, and palladium are highly valuable and have applications in the chemical industry, medicine, aerospace and automotive technology, and jewellery. However, these precious metals – also known as noble metals – are not especially abundant and are difficult to purify, meaning that one of the best ways to procure noble metals is by recovering them from end-of-life products, such as catalytic and electronic waste.

‘Noble metals can be dissolved using different hydrometallurgical methods. Unfortunately, all of them have drawbacks,’ explains Serhiy Cherevko, who studies noble metal dissolution on a fundamental level at the Helmholtz Institute Erlangen-Nürnberg for Renewable Energy but was not involved in this research. ‘The most common approach is to use hydrochloric acid as a complexing agent and nitric acid, chlorine, or hydrogen peroxide as an oxidant.’

A mixture of hydrochloric acid and nitric acid is also known as aqua regia, from the Latin for royal water, and is frequently used to dissolve gold and platinum in industry. However, it is a potentially dangerous mixture and there are environmental concerns related to its use. Because of this, there is a significant drive to find alternatives.

‘Usually people use combinations of strong acids under harsh conditions to dissolve everything, but what we did was to dissolve palladium and platinum using softer conditions and with higher selectivity,’ explains Sofía Riaño, who worked on the project at KU Leuven. The team chose to use two different acidic aluminium salt solutions to dissolve platinum, palladium and rhodium, having been inspired by a sentence in a study published back in 1973.2

‘I am [always] scanning old literature for statements about important observations that could not be explained by the authors at that time, but that might be tackled by modern research approaches,’ explains Koen Binnemans, who led the team at KU Leuven. Fifteen years ago, Binnemans came across a study by Charles Austen Angell that suggested aluminium salt solutions could be used to dissolve noble metals at a much greater rate than can be achieved with aqua regia. Angell planned to investigate this observation in a follow-up work, but these results were never published.

Inspired by this missing work, Binnemans’ team prepared a very concentrated mixture of hydrated AlCl3 and Al(NO3)3 to use as their solvent. They tested it on metal wires and spent automotive catalysts.

In the case of palladium, nitrate ions in the solution oxidised the metal. A chloropalladate (II) complex between the oxidised metal and chloride anions formed and was stable at the low pH. In a matter of hours, the palladium had fully dissolved in solution, and the palladium metal was then recovered via reductive precipitation using ascorbic acid.

‘Platinum can also be dissolved but it just requires longer,’ notes Riaño. ‘Rhodium remains practically intact, but this is also the situation when you use aqua regia; it’s just too inert and you require higher temperatures and pressures to digest it.’ 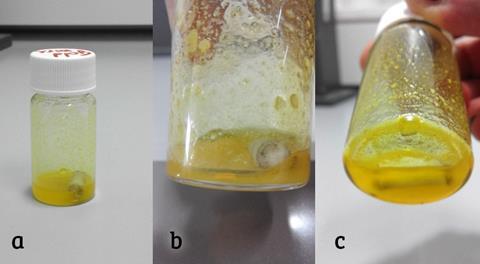 Gold wire in contact with the molten salt hydrate mixture after 3 hours (a), 5 hours (b) and 24 hours (c) leaching

While the aluminium salt solutions cannot be reused, they can be disposed of safely and are much less noxious than aqua regia. However, further work is needed to optimise yields and achieve high purities of the recovered metals.

‘While the dissolution of palladium, platinum, and rhodium from automotive catalytic converters is demonstrated as an example, it is obvious that the method is applicable to recover platinum group metals, as well as gold, from fuel cells, electrolysers, photovoltaics, and electronics,’ says Cherevko. ‘The next logical step would be to study how other concentrated metal salts influence dissolution rates.’

‘We hope that scientists become aware that there is an alternative for the dissolution of these metals, [and] that you do not need to go to really harsh conditions and leach all the metals out to obtain the most valuable ones,’ adds Riaño. ‘But we [also] hope that [this study motivates people] to close gaps of knowledge that have been there for decades.’