Materials scientists at Drexel University have discovered a new method for making the material that is used in the electrodes of energy storage devices like batteries and super capacitors. This clay-like material, made from etched MXene and water, is not only easier and safer to produce than current electrode material, it’s also has twice the capacitance!

A conductive clay made by US researchers might provide a novel way of storing energy that could, one day, surpass batteries. The team developed a cheaper, safer and simpler method to make supercapacitors, tripling the amount of electric energy they can store. Production of the material should be easy to scale-up too.

Unlike batteries, which convert chemical energy into electrical, capacitors store energy as electrostatic potential –similar to creating a static charge by rubbing a balloon on a jumper. Supercapacitors have a number of advantages over batteries in that they charge almost instantly, can release energy in large, quick bursts and are extremely durable. ‘There are some applications where supercapacitors can already replace lithium ion batteries, for example in buses or cars, because of their fast charging time and good cyclability,’ explains Yury Gogotsi from Drexel University in the US, who is part of the team that developed the new capacitor synthesis.

In 2011 Gogotsi and colleagues discovered an entirely new family of two-dimensional supercapacitors, which they called, in homage to graphene, MXenes – M being a transition metal and X carbon or nitrogen. The cheap material can store three times as much energy as standard carbon capacitors. However, MXene synthesis required hydrofluoric acid, which is highly toxic and corrosive. ‘You don’t need to be a materials chemist to know that HF is pretty nasty stuff,’ says Gogotsi.

Now, Gogotsi’s team have developed a simpler and safer protocol to make MXenes, using only dilute hydrochloric acid and lithium fluoride. The team was surprised to find that when the known MXene titanium carbide was synthesised using this method it stored three times as much energy as the same material made by HF etching or six times as much as ordinary carbon capacitors. ‘A somewhat unexpected result,’ admits Gogotsi. ‘We have two explanations for this: firstly, we do less damage to the MXene sheets when we use milder etchants so the quality of the material produced is higher. Secondly, intercalation [of cations and water] during the synthesis opens up the material’s layers so ions can penetrate more easily into the material, giving higher energy storage capacities.’ 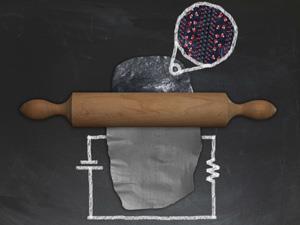 The improved MXene was surprising in another way: it was soft like clay thanks to water in-between the material’s sheets. The team could mould it into different shapes and rolled it into thin sheets like biscuit dough.

Materials chemist Milo Shaffer from Imperial College London, UK, likes Gogotsi’s practical approach. ‘Previously there’s been a lot of work that used aggressive etchants but this is a very attractive process where you end up with a clay-like paste that can be plastically formed in whatever shape you like,’ he says. Other supercapacitor materials like ruthenium oxide beat MXenes when it comes to energy storage; however, MXenes have an economic advantage. ‘The elements we use are inexpensive. Unlike ruthenium oxides, the materials are available in large quantities and can be used on large scale,’ explains Gogotsi.

His team is now working on MXenes other than titanium carbide, which ‘is not necessarily the best performing one’. ‘The new method also allows us to make some MXenes we could not make before and it leads to different properties [in the known materials]. We have a large group of materials to explore, which is very exciting,’ Gogotsi says. Shaffer thinks capacitor–battery hybrids might be another option for energy storage. ‘Wherever you need to do some power management you may benefit from having a combination of a capacitor and a battery. Another question might be if you could ever make a capacitor behave more like a battery. People are already working on various hybrid approaches, for example supercapatteries,’ he explains.