An 8µm-thick layer blocks more than 99.999% of incident radiation

A new composite that can be moulded into ultra-thin, flexible and corrosion-resistant layers able to block electromagnetic noise has been produced by researchers in the US and South Korea, who say the material could prove invaluable to the future of electronics. 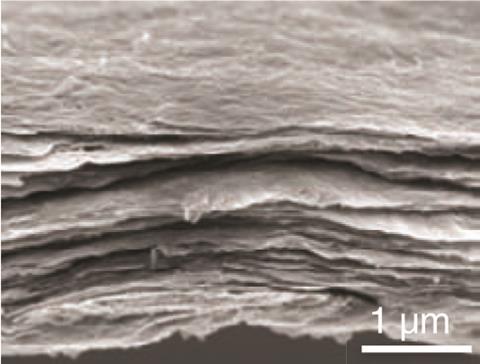 The layers of composite can effectively shield electromagnetic noise, despite being incredibly thin

The most effective electromagnetic shields in use today are metal foils. But metals are dense, vulnerable to corrosion and difficult to fashion into ultra-thin films. ‘People believe that, in future, we’ll have the internet of things, in which pretty much everything we have will be electronically connected to the world,’ explains materials chemist Yury Gogotsi of Drexel University in Philadelphia, US. ‘If you have a very small device, you just don’t have room for protecting it with a thick film of metal which may be larger than the device itself.’ Scientists have therefore developed shielding composites, but these have so far proved less effective.

Gogotsi and colleagues, together with researchers from South Korea, produced films from MXenes – two-dimensional transition metal carbides and nitrides first produced in 2011. The researchers produced thin, flexible films of MXene flakes by vacuum-assisted filtration. They found that 45µm films of the most common MXene, Ti3C2Tx, where T represents various surface functional groups such as –OH and –F, blocked more than 99.999% of incident radiation. This is comparable with aluminium and copper, both commonly used electromagnetic shields, while being lower density and easier to process.

To make the films even thinner and more corrosion resistant, the researchers embedded the MXene flakes in a binder of sodium alginate – a common, environmentally benign material industrially extracted from brown algae. The water solubility of MXene flakes makes producing the composites easy: ‘We take one vial with a solution of single layer, or few layer, MXene flakes and another vial with a water soluble polymer,’ he says, ‘We mix them together and stir, spray, spin or filter on the surface, and the composite is ready.’ A composite film just 8µm thick could also block over 99.999% of electromagnetic noise. 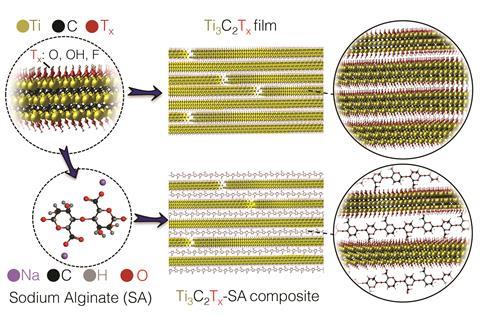 But Gogotsi is sceptical about these claims. In any case, he says: ‘Our work opens a new and very large family of 2D materials (MXenes) to scientists and engineers who work on EMI shielding, plasmonics, antennas and other applications where materials with metallic conductivity interact with electromagnetic waves. We show that MXenes are at least at the level of the best metallic materials, such as Cu and Al. And this is a zero generation material, unlike graphene or carbon nanotubes studied by thousands of researchers for more than a decade.’