Super-slippery 2D material could be ideal lubricant for planetary rovers 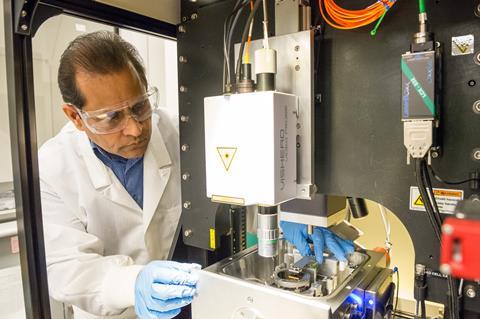 Anirudha Sumant testing the superlubricating MXene in the lab

Titanium carbide MXene exhibits superlubricant properties on the macroscale in oxygen- and humidity-free environments, US researchers have found. The finding, the team said, means the material could be a new solid lubricant to reduce wear and tear on future Mars rovers.

First described in 2011, MXenes – pronounced ‘maxines’ – are a class of two-dimensional, layered metal carbide materials that have attracted attention for their conductive properties – and have been proposed for applications in energy storage and harvesting, sensor design and optoelectronics. Recent studies, however, have found that MXenes also have potential for use as solid lubricants – however, until now, none had demonstrated superlubricity on the macroscale.

Chemist Vadym Mochalin of the Missouri University of Science & Technology and colleagues in collaboration with the Center for Nanoscale Materials at Argonne National Laboratory created the materials by depositing a titanium carbide MXene onto a silicon substrate coated with a thin layer of silica. They then tested friction and wear resistance of the material by sliding it against a diamond-like carbon-coated steel ball.

The tests were all undertaken in a dry nitrogen environment, to reduce humidity. This was necessary because – unlike bulk transition metal carbides, which are typically inert – their two-dimensional forms are, as Mochalin explained, ‘quite reactive and susceptible to hydrolysis, reactions with oxygen and potentially with other reagents’.

The team found that adding graphene to the titanium carbide MXene ‘further reduced the friction by 37.3% and wear by the factor of two’. Such a combination, the team said, is ‘substantially’ better than oil-based lubricants.

‘When I watched the landing of the rover on Mars, I thought: “What if the lubricant in one of its wheels fails?” Then I made the connection with our work on MXenes, because it came to mind that we have just found that MXenes demonstrate superlubricity in an atmosphere devoid of oxygen and humidity, close to what is there on Mars,’ Mochalin says.

‘As long as MXenes are protected in one way or another from direct contact with wet air – for example by applying a coating made of graphene, as we have demonstrated in our research, or of other similar materials – they should work,’ Mochalin explains. Unlike oil-based alternatives, he adds, MXene lubricants have an added advantage in that they do not rely on non-renewable resources like crude oil.

Why MXene has super-lubricating properties, however, remains an open question. ‘We hypothesised about a few mechanisms, which can be related to functional groups on MXene surfaces and intercalated species, as well as the nature of the material itself, but at this stage there is little we can say with certainty,’ Mochalin says.

‘MXenes have shown many marvelous properties and brought many surprises in the past decade, and here the authors show the ability to greatly decrease the friction by using two-dimensional flakes of MXene,’ comments Drexel University materials scientist Yury Gogotsi, whose team discovered MXenes. The finding, he adds, is ‘scientifically interesting and technologically important’.

‘While the reported friction mitigation capabilities are impressive, much work needs to be done to evaluate the suitability of MXenes for actual space missions, in particular with regards to their robustness against changes in environmental conditions,’ adds Mehmet Baykara, a mechanical engineer from the University of California, Merced who was also not involved in the present study.