Update – On November 30 2016, Iupac confirmed the naming of the new elements: nihonium, moscovium, tennessine and oganesson. To find out more about how these elements are made, and see our interview with Yuri Oganessian, after whom element 118 is named, read our feature on what it takes to make a new element.

Confirmation that four new elements – those with atomic numbers 113, 115, 117 and 118 – have indeed been synthesised has come from the International Union of Pure and Applied Chemistry (Iupac), completing the seventh row of the periodic table. 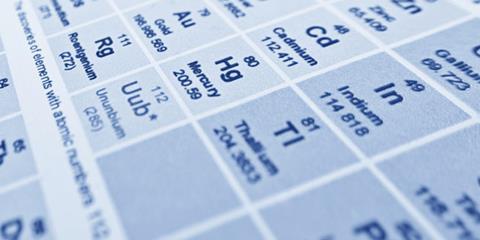 Now that Iupac has confirmed the discovery of the four new elements that complete the periodic table’s seventh row,

The groups credited for creating them – in Japan, Russia and the US – have spent several years gathering enough evidence to convince experts from Iupac and its physics equivalent, the International Union of Pure and Applied Physics, of the elements’ existence. All four are highly unstable superheavy metals that exist for only a fraction of a second. They are made by bombarding heavy metal targets with beams of ions, and can usually only be detected by measuring the radiation and other nuclides produced as they decay.

Element 113 – currently known by its placeholder name ununtrium – is the first to be discovered in east Asia. It was created by Kosuke Morita’s group at the RIKEN Nishina Center for Accelerator-based Science in Japan, by firing a beam of zinc-70 at a target made of bismuth-209. The group first claimed to have created the element in 2004, but there was still some uncertainty at that time because of the instability of one of its decay products. They followed up these experiments with more convincing evidence in 2012.

Elements 115 (ununpentium) and 117 (ununseptium) were discovered by groups collaborating across three institutions – Lawrence Livermore National Laboratory in the US, the Joint Institute for Nuclear Research in Russia and Oak Ridge National Laboratory in the US. The Lawrence Livermore-Joint Institute for Nuclear Research collaboration is also credited with having fulfilled the criteria for discovering element 118 (ununoctium) in work published in 2006.

All of the laboratories involved have made major progress since their initial claims,’ says Lynn Soby, executive director of Iupac. ‘And here we are: all four have substantiated their claims.’

Now that the elements have been officially discovered, the institutions responsible will get to choose permanent names for them. But it will be a while before the textbooks and posters can be updated, as the new names and symbols will have to be approved by the inorganic chemistry division of Iupac and submitted for public review. Various rules govern the names that can be given to new elements, which can be inspired by nature, mythology, people, properties or places. ‘The symbol is particularly important,’ says Soby. ‘They have to go through all the archives to check if it has ever been used before. It has to be unique.’ She adds that the timing is hard to predict, but estimates the process will take between four and six months.

These groups and others are now likely to turn their attention to elements beyond the seventh row. This presents fresh challenges, partly because the targets used for bombardment experiments would have to be made of superheavy, short-lived elements themselves. So far, no one claims to have discovered 119 or any elements heavier than it. Researchers are hopeful that an ‘island of stability’ may exist beyond element 118, allowing production of further superheavy elements, although exactly where this island can be found or whether it exists at all is still a matter of debate. ‘We just don’t know when that [sighting] will be … it could be next week, it could take a year or 10 years – even when someone claims a discovery they have to prove it,’ says Soby. ‘It’s a great unknown right now.’