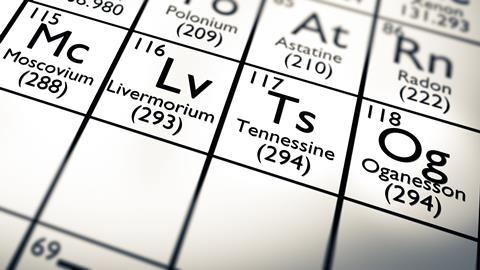 Elements that complete seventh row of periodic table will be named nihonium, moscovium, tennessine and oganesson

The official names for elements 113, 115, 117 and 118 are nihonium, moscovium, tennessine and oganesson respectively, the International Union of Pure and Applied Chemistry (Iupac) has announced.

The news comes after a five month consultation process where the public were called to express their opinions on the four proposed names and their corresponding symbols. The symbols for the new elements will be Nh for nihonium, Mc for moscovium, Ts for tennessine and Og for oganesson.

Moscovium and tennessine were attributed to a team divided between the Lawrence Livermore and Oak Ridge National Laboratories in the US and the Joint Institute for Nuclear Research in Russia. Both elements were named in tribute to regions that carry out superheavy element research, Moscow and Tennessee.

Iupac invited the teams to propose names for the new elements, confirming the suggested names in June this year. According to the Iupac guidelines, an element can only be named after a mythological concept or character, a mineral, a place or geographical region, an elemental property or a scientist.

The confirmed names have now been published in the Iupac journal, Pure and Applied Chemistry.