Explainer: superheavy elements. Everything you ever wanted to know about the last row of the periodic table but were afraid to ask

How do you make a new element, how can you make sure you’ve really made it and what kit do you need?

What is a ‘superheavy element’?

The term superheavy element is rather vague and there’s no agreed upon definition. However, most scientists use it to describe an element with more than 100 protons in its nucleus.

How do you make a superheavy element?

Here’s the (very) basic theory: take two lighter nuclei that contain the number of protons in the element you want to make, and then add them together. For example, to make moscovium (115 protons), scientists combined calcium (20 protons) with americium (95 protons). But, as you might have already guessed, in practice this isn’t so simple. 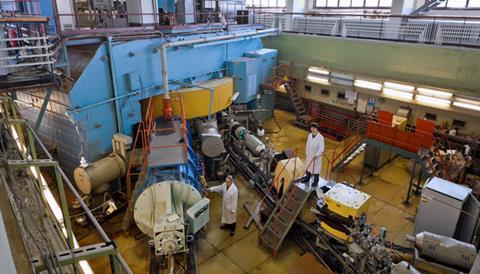 Scientists at the Joint Institute for Nuclear Research in Dubna, Russia, in front of their synchrotron. The particle accelerator is a key piece of kit for superheavy element hunters

Nuclear fusion only happens under extreme conditions, like in the sun’s core. To get the nuclei to combine, we have to overcome the electrostatic repulsion between the positively charged protons in each nucleus. In a lab, that means accelerating one of the nuclei to very high energies – around 10% the speed of light – and firing it at the other nucleus (the target).

Most of the time when the projectile hits the target the colliding nuclei break apart immediately, but occasionally (very, very occasionally) the nuclei will stick together. This is a rare event, and it gets rarer as the elements get bigger.

That’s because the force holding protons and neutrons together in the atomic nucleus is a powerful, but very short-range interaction (called the nuclear strong force) that is in competition with the electromagnetic force. The more protons and neutrons you try to cram into an atomic nucleus, the more likely it is that the repulsive effects of the electromagnetic force will win out and the nucleus will be torn apart.

Scientists try different combinations of projectiles and targets and have to run their fusion experiments for months on end, often to only detect a few atoms of a new element, if any. 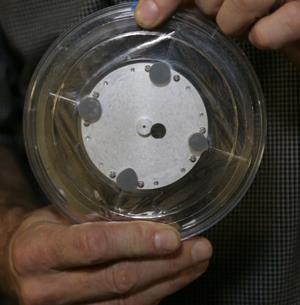 A rapidly spinning target disk holds one of the starting elements

Even if a collision creates a new element, it will often be so unstable that it immediately breaks apart in a more or less random manner – a process called fission. Neutron-rich starting isotopes can keep this from happening. They help to stabilise a freshly formed nucleus by allowing it to shed energy through neutron emission.

Moreover, adding a few extra neutrons can bring the new element closer to the island of stability. For that reason, calcium-48 is a favourite projectile with superheavy element hunters: with 28 neutrons alongside its 20 protons it is unusually neutron rich.

So what kit do you need to make a superheavy element?

You’ll need an ion source, a cyclotron to accelerate the ions, a target, a separator and a detector. The Lawrence Berkeley National Lab’s cyclotron in the US pumps out around 1014 highly charged ions (such as Ca10+) per second, accelerating them up to speeds of around 30,000 km/s.

The beam of ions exits the cyclotron, smashing into a rapidly rotating target disk. Spinning the disk is important – without it, the stream of high energy particles would quickly burn a hole in the target.

Behind the target, a magnetic separator sieves out particles with the new element’s mass from everything else that the millions of collisions between the projectile beam and the target produce. The separator works like a mass spectrometer – the magnetic field is tuned such that  only particles  with the desired mass to charge ratio make it through. Whatever makes it past the separator’s filtering process then lands in the detector.

In the video at the top of the page, Ken Gregorich and Jackie Gates, scientists at the Lawrence Berkeley National Laboratory, give you a guided tour of their element factory.

But if the elements only last for fractions of a second, how can scientists be sure they’ve detected one?

The elements might not stick around for long, but when the atom decays, it does so in a characteristic pattern. Most superheavy elements emit α-particles (helium nuclei). Each α decay removes two protons and two neutrons from the nucleus, leaving behind a lighter nucleus that will undergo another decay and so on, creating a decay chain that is unique to that element.

However, an atom often decays into an unknown isotope of a known element, which has an unknown decay chain. Researchers then have to synthesise these isotopes, observe their decay chains and match them up with the data from their new fusion experiment.

When scientists have made at least a few atoms of a new element, they submit their findings to the International Union of Pure and Applied Chemistry (Iupac). Another lab then reproduces the experiments before Iupac officially confirms the claims.

Most superheavy elements are very unstable and it is unlikely that scientists will ever make one that sticks around for more than even a few minutes. However, since the 1960s, scientists have predicted that some superheavy isotopes would have half-lives several orders of magnitude longer than others. This is the island of stability.

Scientists think the atomic nucleus, just like an atom’s electron shell, is made up of individual shells that have different energy levels. Certain proton and neutron numbers make for a particularly stable nucleus; these are called magic numbers. A nucleus that has both a magic number of protons and neutrons is doubly magic. 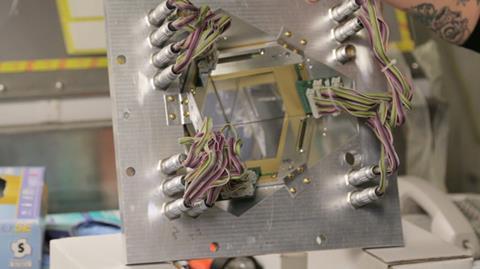 Compared with other pieces of kit, the detector is one of the smaller parts

Not a lot is known about what exact numbers are magic. Different calculations predict different numbers. However, evidence points towards 184 being a magic neutron number. Researchers studying flerovium (element 114) isotopes have seen an increased half-life for more neutron-rich isotopes, even though the heaviest isotope synthesised so far, flerovium-289, is still nine neutrons shy of this magic number.

How big can the periodic table get?

Predictions vary, but there are limits to how big the periodic table can get. With increasing proton number, it gets harder for the innermost electrons to resist the pull of a massive, positively charged nucleus. When the inner electrons dive into the nucleus, an atom simply can’t exist anymore.

Physicist Richard Feynman predicted that the periodic table would end at element 137. He based his calculations on the strength of the electromagnetic interaction between charged particles. However, Feynman’s predictions assumed the nucleus to be perfectly spherical, something that isn’t necessarily true. Some decades ago, scientists predicted very heavy elements could have oblate spheroidal nuclei, and such lentil-shaped nuclei could hold up to 170 neutrons.