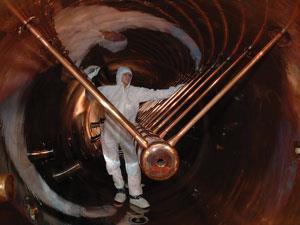 A Swedish-led team has become the second to spot element 115, which has a half-life of just 160 milliseconds, and potentially the first to capture its x-ray ‘fingerprints’.

Over three weeks in November 2012 at GSI Helmholtz Centre for Heavy Ion Research in Darmstadt, Germany, the team detected 30 radioactive decay sequences matching previous sightings. ‘After 24 hours we had our first event,’ says team leader Dirk Rudolph from the University of Lund. ‘That’s unusual – we were happy to see it that soon.’

Experiments yielding evidence for candidates for elements 113 to 118 have now been going on for a decade. Scientists from the Joint Institute for Nuclear Research (JINR) in Russia, and Lawrence Livermore National Laboratory (LLNL) in California have led these efforts. And together, they first claimed to have identified element 115 in 2004.

Last year, the JINR and Livermore groups had elements 114 and 116 named flerovium and livermorium after a famous Russian physicist and the LLNL, respectively. But a joint working group of IUPAC and its physics counterpart, IUPAP, asked for independent detection of odd-numbered unstable elements, and possibly direct proton number measurements.

That’s what Rudolph’s team sought to provide. They bombarded thin films of unstable americium with a beam of almost 1013 calcium-48 ions per second from the UNILAC accelerator at GSI. ‘We fuse together one calcium and one americium atom to observe element 115 candidates once or twice per day,’ Rudolph explains. ‘To see this, we need to pick out what we want from the haystack of calcium ions.’

The team’s TASCA separator does this by magnetically changing the angle that the new heavy atoms fly at, sending them crashing into a cube of silicon detectors. There the researchers monitored a-decay chains, comparing them against theoretical predictions and earlier sightings. With surrounding germanium detectors they also tried to measure energies of x-ray photons emitted. As well as the 30 newly-measured decay chains, the researchers saw two possible x-ray emissions that fit predictions for element 115.

Rudolph indicates, however, that IUPAC and IUPAP might want more x-ray data before officially recognising element 115. ‘They may say: “You’ve proven that you can fingerprint proton number, so go ahead and do it properly, using more beam time.”’