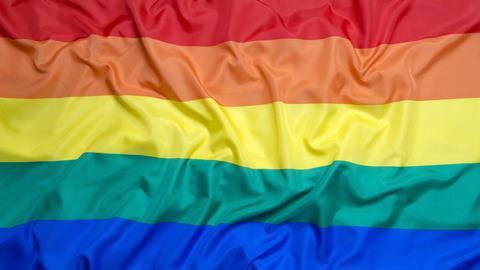 A survey has revealed that hostile workplaces and discrimination are making LGBT+ scientists in the UK contemplate leaving their jobs. 28% of LGBT+ respondents considered quitting in the past year, and one in five trans scientists thinks about it often.

The Royal Society of Chemistry (RSC), Institute of Physics and Royal Astronomical Society survey – Exploring the workplace for LGBT+ physical scientists – found that 16% of respondents have experienced exclusionary behaviour in the past year. As many as 30% have witnessed such behaviour. 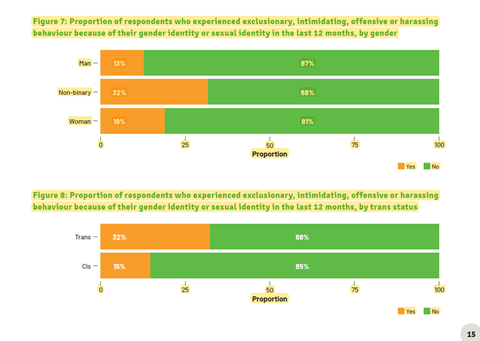 More than a thousand people contributed to the survey, with data from 588 respondents analysed in detail. The three societies circulated the survey via social media platforms. An even split of doctoral students and academic scientists made up 75% of the cohort, 8% teach science in primary, secondary or further education and 17% work in science outside of education.

The survey also found that 19% of respondents working in chemistry experienced exclusionary, intimidating, offensive or harassing behaviour based on gender identity or sexual identity in the past year. In astronomy and physics, those figures were 10% and 13% respectively. 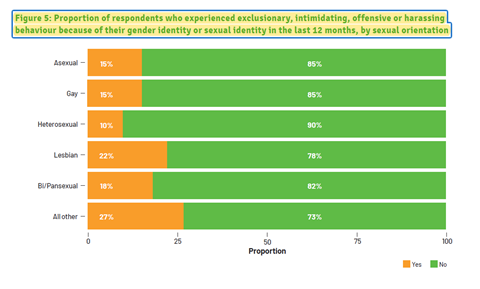 Although non-binary and transgender scientists were particularly at risk of discrimination, 75% of respondents felt comfortable at work and 70% see the climate for LGBT+ scientists improving. ‘While the survey showed people were generally comfortable, there are clearly still some issues with the culture in the workplace with one in four still feeling unable to be themselves at work,’ says RSC deputy chief executive Helen Pain.

University of Oxford materials scientist Clara Barker met just two out LGBT+ scientists during her 13-year pre-transition career. ‘I felt lost,’ she says. ‘There was no LGBT+ visibility and certainly, I never saw a trans scientist. I thought I’d have to leave my career if I transitioned, which would have been a shame because I enjoyed what I did.’

‘Colleagues might say private lives should stay private, but now this report legitimises us talking about who we are. For me, the time and effort these societies have invested in this report is a huge statement.’

‘Changing the opinions of some of our entrenched professors will be a slow process, just as we know race and gender barriers still exist,’ says Barker, who heads up Oxford’s centre for applied superconductivity. ‘This report, however, highlights the need for representation. Diverse groups of people bring different perspectives, ingenuity and creativity, which science feeds off. We will not make leaps without this input.’

The results suggest a culture of concealment exists in some scientific environments. In fact, 15% of respondents sense an expectation for LGBT+ colleagues to remain closeted at work, with that figure rising to 23% of the science teachers that responded.

Interviews also revealed a propensity for impersonality within scientific environments, which some respondents used as a reason to undermine pro-LGBT+ initiatives. In parallel, 49% said their co-workers lacked awareness of LGBT+ issues. ‘Some LGBT+ respondents even felt the discussion of personal lives or interests outside of work could be perceived negatively by colleagues,’ says Pain. ‘This kind of atmosphere is both harmful for those individuals and the wider physical sciences community – and needs to be addressed to prevent these attitudes becoming more prevalent in the workplace.’

The report recommends employment policy updates and practical measures such as inclusivity training and adding pronouns to email signatures and blogs to foster inclusivity. It also suggests employers become active members of LGBT+ organisations and promote LGBT+ events and networks.