Protein-based nanosensors use fluorescence to show damage in polymer materials

Fluorescent proteins could one day help identify microscopic cracks and damage in polymer materials, allowing them to be monitored to prevent failure in load-bearing applications such as in aerospace and biomedical devices, US researchers claim.

Doug Clark and colleagues from the University of California in Berkeley encased two fluorescent proteins inside two halves of a protective protein shell and embedded them into a polymer matrix. How far the two halves of the shell are pulled apart affects the fluorescence of the two proteins, so monitoring the fluorescence would indicate where the polymer was being deformed or cracked.

The protein shell that the team used is called a thermosome. It comes from the microbe Thermoplasma acidophilum, which thrives in hot, acidic conditions where normal proteins would quickly lose their function. ’We took advantage of proteins from this extremophile organism because they are particularly robust and won’t fall apart during processing of the material,’ explains Clark.

He describes the thermosome as a ’molecular barrel with two large chambers which are just the right dimensions to incorporate the two fluorescent proteins and separate them by just the right distance - it’s almost like it’s tailor-made for this application.’ The team grow the proteins in engineered E. coli bacteria, so Clark is confident that they represent a cost-effective and green way of making nanosensors. 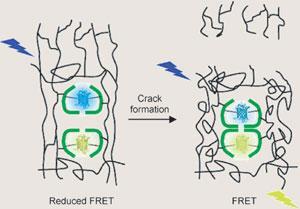 The distance between the two halves of the protein shell is crucial, because the fluorescence signal from the proteins relies on a process called fluorescence resonance energy transfer (FRET). Certain pairs of molecules, in this case a blue and a yellow fluorescent protein, can transfer excitation energy between themselves over short distances. When the two proteins are held close together, the blue protein can transfer its energy to the yellow one, so a yellow FRET fluorescence signal is detected, but as the proteins are separated, this transfer becomes less efficient, so the blue protein simply fluoresces blue, rather than transferring its energy by FRET.

’Our original hypothesis,’ explains Clark, ’was that the thermosome would maintain its structure inside the material, and that damage to the polymer would pull the two halves apart, so the FRET signal would be on when the material was in tact and off where it was damaged.’

But the reality is more complex: ’What we found, when we actually made the materials, is that the regions around the micro-cracks actually had a stronger FRET signal, which was essentially the opposite of what we expected. We think that the polymerisation process introduces a separation or distortion of the thermosome, which reduces the FRET signal. When cracks form, the polymer relaxes and the two halves of the thermosome come back together, and the FRET signal increases.’

In terms of applications, Clark admits that they’re still at quite an early stage: ’We’re using some quite sophisticated analytical techniques here, but ultimately the idea would be to test for damage just by scanning the material with a hand-held fluorescent light-source.’ The team are also looking into using a fluorescent protein with a fluorescence-quenching molecule in the second cavity instead of FRET, to give a simple on/off signal to indicate damage, rather than the more subtle FRET signal. He adds that the probe could also find use in basic research to study changes at the molecular level in materials under strain.

’This work demonstrates a very clever interplay between synthetic polymers and proteins from thermophilic organisms to create fascinating nanosensors,’ says Marek Urban, an expert in smart polymeric materials from the University of Southern Mississippi in Hattiesburg, US. ’The products are also solid films, and creating and maintaining stimuli-responsiveness in the solid phase is not a trivial task.’