Elastic springs switch sound on and off

US researchers have developed a tunable spring-like material that can be stretched and squashed to switch the transmission of sound on and off. The acoustic metamaterial – structures that can control the propagation of sound – could be useful for buildings and transportation where temporarily blocking out sound is desirable, or for tunable sound-based imaging. 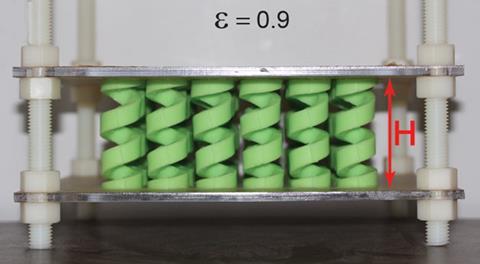 When compressed, the elastic helices interfer sound waves, decreasing them by 30dB in the audible frequency range

Acoustic metamaterials have been created before, but they mainly work in fixed frequency ranges and often cannot be tuned once manufactured. Those that can be tuned rely on structural instabilities that involved large and sometimes irreversible deformation.

Now, a team at Harvard University and the Massachusetts Institute of Technology (MIT) have shown how elastic helices could offer a new class of switchable acoustic metamaterials. ‘This is most likely the first acoustic metamaterial that can switch sound on and off in the audible frequency range using pure mechanical compression,’ says Nicholas Fang, a co-author of the study at MIT.

The idea behind the material is quite simple. It was known that an array of solid-walled tubes can block sound by scattering and interfering with sound waves. With this in mind, the team figured that solid tubes coiled into helices – much like a series of compressed springs – would allow the tubes to be stretched open and then squashed shut to turn sound on and off.

To test their idea the team made an array of 36 elastic helices sandwiched between two sheets of foam-covered acrylic, like a press. By opening and closing this press, the springs could be relaxed or compressed. Sounds were then played through loudspeakers to test its noise dampening properties.

When fully open, sound audible to humans in the frequency range of 2.75–7.40kHz got through the material unaffected. But when fully compressed, the team measured a 30dB drop in the same frequency range. ‘This is quite remarkable, considering we only tested a pretty small array of helices,’ says Fang.

‘Other research has demonstrated dynamic control, including some from my group, but much of that only works for a narrow frequency range, like a single tone,’ explains Steven Cummer, who develops acoustic metamaterials at Duke Univeristy, US. ‘This approach is broadband in principle, and that is much more useful for a lot of applications.’

However, Cummer thinks that the current material might be too slow and hard to control for real world settings at present. Fang suggests that the material is also too thick as a realistic sound insulation material. ‘We will consider using foam structures instead of solid helices to further reduce the volume fraction while maintaining good attenuation per unit mass,’ he says.