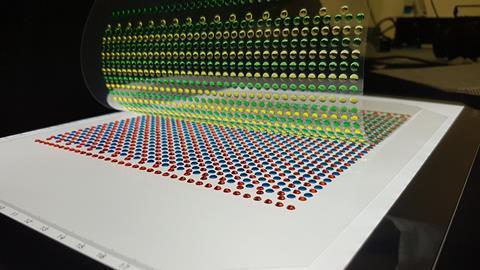 The electric eel can defend itself or stun prey by delivering powerful electric shocks. Now researchers in Switzerland and the US have used similar principles to develop an electrically excitable hydrogel that could be used as flexible, biocompatible power sources for medical implants.

The batteries in manmade electronic devices generate voltages by internal redox reactions. Such batteries can create problems with flexibility and toxicity, and would be almost impossible to incorporate with the body’s metabolism. Living organisms themselves generate the voltages required to move muscles, for example, by separating positive and negative ions. In an effort to develop an ionic power supply, biophysicist Michael Mayer and colleagues at the University of Fribourg and the University of Michigan, Ann Arbor looked to the electric eel.

The eel’s electrocytes (electrically excitable cells) contain ion channels at front and back. These pump sodium cations out into the extracellular fluid, creating opposite potential differences at either end of the cell that normally cancel each other out. When triggered by a nerve impulse, the ion channels at the back of each electrocyte become permeable, allowing the sodium ions in and therefore creating an overall potential across the cell. By stacking thousands of cells in series, eels can deliver up to 600V. 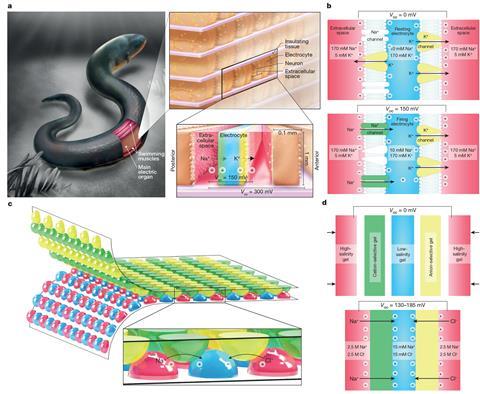 The researchers used fluidics and surface printing to produce analogous systems comprising series of tiny compartments of four types of hydrogel: one made with concentrated sodium chloride solution, one with dilute salt solution, one of which would allow the passage of only cations and one that could only conduct anions. When these gels were pressed together, the one-way flow down the concentration gradient could produce 130-185mV per cell, and stacking 2,449 together allowed them to produce up to 100V. By stacking more cells, says Mayer, the researchers could reach 600V, just like an eel. The issue is that, whereas an eel can deliver power outputs of up to 100W, the much larger internal resistance of the hydrogel cells limited the power to around 50μW. The researchers are working to address this now.

At present, recharging the system involves applying an external electric current to drive the ions back up the concentration gradient. ‘What one ultimately would want to have is a system that could be implanted,’ says Mayer. ‘Maybe the most obvious thing to think as a next step would be to try in some creative way to tap into the existing ionic gradients within the body. Much better of course would be a design where one could tap into metabolic energy to keep an artificial organ always charged. That would be the ultimate achievement, but that’s very difficult to reach and we have not approached that part of the problem.’

David LaVan of the National Institute for Standards and Technology in Maryland, US, says that many groups, including his own, have tried producing synthetic batteries using natural ion pumps. ‘It’s challenging to get them to even survive in the lab for, say twelve hours,’ he says, ‘so it would be very hard to get from there to a commercial product.’ The new work’s use of ion-selective gels instead allows the researchers to produce much more stable devices, he explains. ‘It’ll take further development to see whether they can get the efficiencies up to the point where it would be a useful product, but I’m optimistic.’ To produce a synthetic ion pump, allowing the device to be charged metabolically, would be ‘an enormous, Nobel prize-sized leap forward,’ he adds.