Researchers in the US and Germany have synthesised and characterised an iron nitride compound that reacts with water to produce high yields of ammonia under mild conditions. The work could help elucidate the mechanisms behind iron-based catalysts, both for industrial and biological ammonia production, which could allow for cheaper non-toxic catalysts.

Chemists have previously proposed iron nitride intermediates that might play key roles in the catalytic conversion of atmospheric nitrogen to ammonia, a commercially important reaction for the production of fertilisers and drugs. There have been reports of iron(IV) and iron(VI) compounds, as well as some spectroscopic results for an iron(V) nitride. However, obtaining both the structural and spectroscopic evidence has remained a challenge owing to the fleeting nature of these compounds.

Now, Jeremy Smith’s group at the New Mexico State University in Las Cruces, US, and Karsten Meyer’s group at Friedrich-Alexander-University of Erlangen-Nuremberg, Germany, have generate the first direct evidence of an iron(V) nitride complex existing as a stable solid compound. What’s more, it is highly reactive, producing high yields of ammonia at -78?C, a relatively low temperature for catalysis, using water as a proton source. 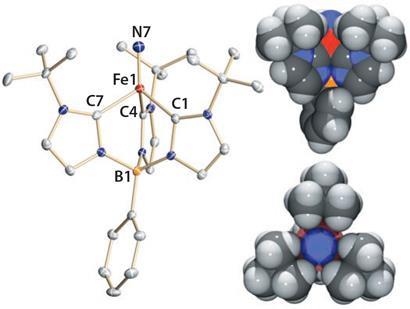 ’This is the first time anyone has shown by a combination of structural and spectroscopic methods that iron(V) does exist,’ says Smith. ’This is important for people who are investigating mechanisms of metalloenzymes.’ He adds that before now it was more difficult to believe proposals of iron(V) compounds as a reactive intermediates.

’Ten years ago, if someone had told me that a chemist was going to isolate a pure iron(V) compound, I would have said it would be impossible,’ says Patrick Holland, who studies the interactions of iron with N2 at the University of Rochester in New York, US. ’Even though the iron nitride in this paper is not closely related to ones in commercial ammonia production, the unprecedented stability of iron(V) is a significant achievement’.

Using x-ray crystallography, Smith’s group obtained the structural details of the complex at the atomic level, while Meyer’s group used spectroscopy to determine its electronic structure. Once they knew where the electrons were in the complex, they were able to determine the oxidation state of the iron.

A nitride (N3-) ligand bound to an iron centre would usually be extremely unreactive and require very harsh conditions, such as strong acidity, to react. ’Our results show that, in the right environment, an iron nitride can make ammonia from water, which is surprising given this precedent of very low reactivity,’ says Smith.

John Berry, who investigates iron nitride chemistry at the University of Wisconsin, Madison, US, is enthusiastic about the work. ’The iron(V) nitride is somewhat of a "missing link" in iron nitride chemistry,’ he says. ’I am doubtful that this result will lead directly to new ways of making ammonia under milder conditions, but future technologies could employ the reactivity principles presented here.’

Smith agrees and is keen not to oversell the results: ’I think the benefit is less likely to be immediately practical, but we have shown that we can, in a sense, replicate some of the reactivity of the biological system.’