The US Environmental Protection Agency (EPA) has reached a $220 million (£169 million) settlement with Utah over the agency’s botched investigation of the abandoned Gold King mine in Colorado. The settlement comes exactly five years to the day since a dam was accidentally breached at the mine, releasing 11 million litres of contaminated water into major US waterways in Colorado, Utah and New Mexico. The leaked wastewater contained lead, cadmium, manganese, iron, zinc, copper and arsenic, as well as mercury, and it turned downstream waters orange. 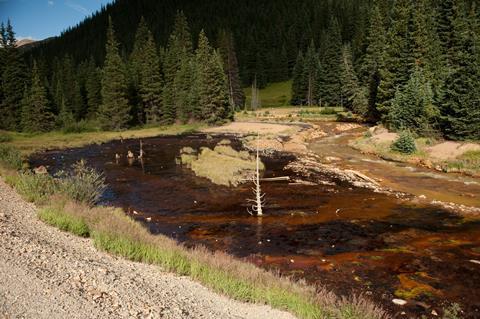 The spill started in Cement Creek in Colorado’s San Juan mountains and flowed downstream into the Animus River and the San Juan River, turning their waters orange.

Under the agreement, the EPA will fund efforts to address contamination at the Bonita Peak Mining District Superfund Site, which includes the Gold King mine and other abandoned mines in Utah. This could involve monitoring and cleaning mining areas located in other states. In addition, the EPA will initiate assessments at multiple sites across Utah to determine if further remediation is necessary, and the agency will bear the cost, which may exceed $200,000 per site.

‘After years of intense litigation and negotiations, we are very pleased that millions of dollars can now be spent towards mitigation, remediation and assuring water quality in Utah rather than years of more litigation, trial and appeals,’ said Utah’s attorney general, Sean Reyes. ‘We are highly encouraged the EPA has stepped up and committed hundreds of millions of dollars toward cleaning up several dangerous mining districts containing billions of gallons of potentially harmful substances that threaten Utah if they are released.’

Reyes, who referred to the agreement as a ‘landmark settlement’, said Utah’s Department of Environmental Quality has been monitoring the San Juan River and Lake Powell since the 2015 incident, and there is no evidence that the metals from the release are impacting public health or the environment.

Native American tribes and the state of New Mexico have also taken legal actions against the agency to recover damages sustained as a result of the incident. The San Juan River is a key water source for the Navajo and Southern Ute Indian Nations, and the wastewater spill began in the Animas River that flows into New Mexico where it joins the San Juan River. New Mexico’s case is expected to go to trial in 2021. Colorado state has decided not to sue the EPA over the spill.