Environment agency accident releases toxic mine waste into US rivers 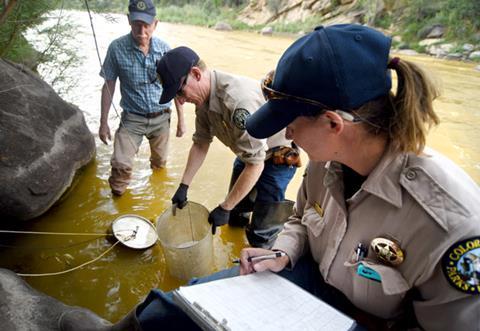 The US Environmental Protection Agency’s (EPA) botched investigation of an abandoned mine in Colorado has led to more than 11 million litres of water contaminated with metals entering major US waterways. This failure has resulted in environmental, public health and political fallout.

On 5 August, the EPA was investigating the Gold King mine near Silverton, Colorado, US, when heavy equipment use accidentally led to the breach of a debris dam. The tainted water stored behind the collapsed material then spilled into the Cement creek, a tributary of the river Animas.

The water contained lead, mercury, cadmium, manganese, iron, zinc and copper, as well as arsenic and other toxic substances, and turned downstream waters orange. Other waterways in New Mexico and Utah were also affected.

The EPA initially estimated that almost 3.8 million litres of contaminated mine water had spilled, but the figure was revised to over 11 million litres three days later.

EPA administrator Gina McCarthy called the accident a ‘tragic and unfortunate incident’, and emphasised that the agency is taking responsibility for the clean-up. EPA data reveals that the concentration of lead in the Animas was at 5720ppb on 6 August, far surpassing the acceptable threshold of 50ppb set by Colorado. Levels for other contaminants including cadmium, arsenic and iron also exceeded safe levels.

Jonathan Freedman, a  toxicologist from the University of Louisville School of Medicine in Kentucky, US, says that mercury concentrations found in the Animas after the accident were close to 10 times the EPA’s safe limit.‘In the US, there hasn’t really been anything like this reported,’ Freedman tells Chemistry World. ‘There are lots of reports of long-term mine leaks where little bits of contaminants get into waterways, but nothing where you have had a major spill like this.’

A comparable incident occurred in China in 2012, when millions of litres of toxic waste contaminated the Guangxi Longjiang river, adding about 20 tonnes of cadmium over a month.

Settled in the sediment

‘In China, the immediate response was to have people drink bottled water, and they dumped a chemical into the river to remove the cadmium from the water column, which just basically moved it into the sediment,’ Freedman recalls. Similarly, in the case of the Animas river contamination, he suggests that the water might be clear, but the metals have not vanished. Although they may no longer be detectable in the water, the metals will probably end up in the sediment or the soil. They could then be taken up by animals grazing on contaminated land and thereby enter the food chain, Freeman adds.

‘None of these things are at a level that will cause immediate toxicity, unless you drank that water or swam in it, but it is the long-term effects that I would be worried about,’ Freedman says. He notes that it will be necessary to monitor the situation to determine, for example, whether there is an increase in birth defects from the affected areas over the next year or so.

Joseph Landolph, a genetic toxicology and chemical carcinogenesis expert with the University of Southern California, US, agrees that it will take a while for the toxic effects to be manifested in humans, but he notes that this sort of pollution can damage the ecosystem. ‘These things are toxic to lower mammals – I think we will find that in the near-term,’ Landolph says.

Regarding the EPA’s clean-up efforts, Evan O’Keefe, a supervisor with the San Juan County Geographical Information Systems department, says that the contaminated water is still leaking from the mine, but by the time it reaches the river it appears to be clean. ‘We don’t know whether it is safe to drink,’ he adds. ‘Right now the river is closed down and anyone on well water has been asked to have it tested.’

The EPA has now said that water quality levels are returning to normal. Samples taken between 5 and 9 August show elevated levels of dangerous metals as the plume advanced, but the Animas river has now ‘returned to pre-event conditions’, the agency said on 13 August.

The EPA is still evaluating water quality data and does not anticipate any decisions regarding the re-opening of the Animas and San Juan rivers until at least 17 August. The assessment of impacts to wildlife and fish populations is ongoing, but the agency says that it has seen no indication of widespread fish mortality in either of the rivers.

The debacle hasn’t escaped congressional attention, however. The chairman of the House science, space, and technology committee, Republican Lamar Smith, requested a briefing from the EPA about the incident by 24 August. Smith said that the agency has failed to answer important questions, including whether the polluted water poses health risks to humans or animals. Top Democrat Senator Barbara Boxer also urged the EPA to take steps to ensure that such incidents aren’t repeated.

Freedman says that new methods must now be developed for storing the toxic byproducts of industrial activities like gold mining. Chemists will be needed to help to develop a treatment that can immobilise heavy metals and other toxic compounds, he suggests.

Landolph agrees that long-term solutions are needed to treat these mines. ‘They need to trap it, contain it and remediate it,’ he says. ‘These are like time bombs waiting to go off – there are 100 sites like this across the west.’