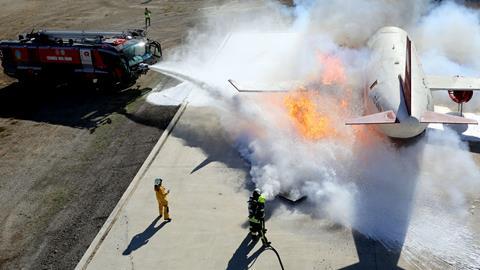 The European Chemicals Agency (Echa) has proposed an EU-wide ban on all per- and polyfluoroalkyl substances (PFAS) in firefighting foams, to prevent further groundwater and soil contamination. Based on a review of the environmental and health dangers posed by the use of these chemicals in firefighting foams, the agency announced on 23 February that restriction throughout Europe is justified because the risks posed by PFAS – a controversial class of persistent, highly mobile and potentially toxic compounds – are not adequately controlled.

The agency’s proposal would ban the sale, use and export of all PFAS in firefighting foams after use or specific transition periods that would allow time for industry to replace these foams without compromising fire safety. During the transition phase, companies still using PFAS-based foams would have to ensure that environmental release is minimised, and that expired foams and related waste are appropriately disposed of.

The restriction, if adopted, could reduce the release of PFAS into the environment by more than 1000 tonnes over 30 years, Echa estimates. The agency calculates the associated costs of the proposal at approximately €7 billion (£5.8 billion) over the same period, including the price of modifying equipment for using PFAS-free foams, cleaning equipment to remove residues, and the cost difference between PFAS and alternative foams.

Meanwhile, five European countries – the Netherlands, Germany, Denmark, Sweden and Norway – are currently developing a restriction proposal that will cover all PFAS in other uses. These nations plan to submit their proposal to Echa in January 2023. ‘The risk assessment introduced in the proposal to restrict PFASs in firefighting foams is relevant for all PFASs,’ Echa said. ‘This means that it will also pave the way to assessing risks in the wider PFAS restriction.’

Echa’s scientific committees will now begin assessing the proposed restriction options, and they are expected to issue an opinion in 2023. Ultimately, the European commission, together with the 27 EU member states, will make a final decision about any ban and its conditions.

In its Chemicals Strategy for Sustainability, published in October 2020, the commission committed to phasing out the use of PFAS in the EU, unless their use is deemed irreplaceable and ‘essential’.