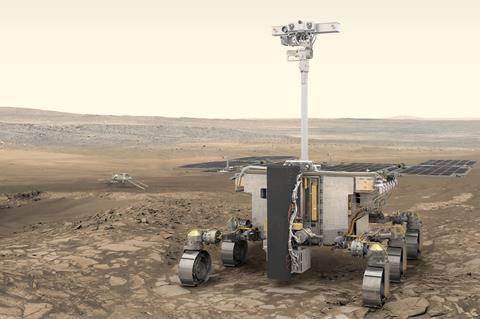 The European ExoMars rover was due to begin searching for signs of life on the red planet in 2022. However, sanctions on Russia following the invasion of Ukraine mean the launch in a Russian rocket will be delayed – perhaps indefinitely

The European ExoMars rover that was due to launch aboard a Russian rocket in September will almost certainly be delayed because of sanctions against Russia following its invasion of Ukraine. The rover, which was due to land on the red planet in June 2023 and search for traces of life beneath the surface, is part of the international ExoMars programme led by the European Space Agency (ESA) and the Russian state space agency Roscosmos.

Esa announced on 28 February that it is assessing the impact of sanctions on Russia for its joint missions with Roscosmos. Esa will align its decisions with its member states and international partners, particularly Nasa when it comes to the International Space Station (ISS).

Roscosmos recently halted launches from Europe’s primary spaceport in French Guiana in response to sanctions following the war in Ukraine. Esa has concluded that for the ExoMars rover ‘the sanctions and the wider context make a launch in 2022 very unlikely’. The agency said it continues to monitor the situation, and director general Josef Aschbacher said a formal decision is on the way from Esa’s member states.

The ExoMars rover, named Rosalind Franklin after the British chemist whose pivotal work led to the discovery of DNA’s structure, has already faced several setbacks. Initially slated to launch in 2018, technical difficulties involving its parachute landing system forced a delay to 2020, and then the pandemic and associated restrictions pushed things back to September 2022. There are now concerns about new cost overruns that would be associated with replacing systems built by Russia.

The fate of the ISS is also in question. The space station is backed by Esa, Roscosmos, Nasa, and the space agencies of Canada and Japan, and it currently has five astronauts onboard – three from Nasa and one from Esa – as well as two Russian cosmonauts.