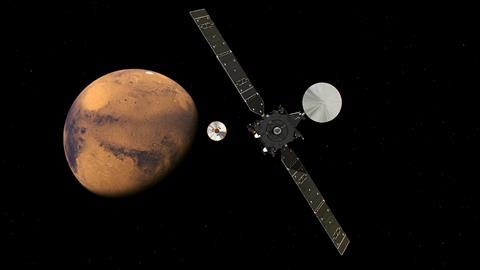 Hydrogen chloride gas has been detected in Mars’s atmosphere for the first time by the ExoMars Trace Gas Orbiter of the European Space Agency (Esa) and the Russian space corporation Roscosmos. ‘This is the first detection of a halogen gas in the atmosphere of Mars, and represents a new chemical cycle to understand,’ said Kevin Olsen from the University of Oxford, one of the lead scientists on the project.

The discovery of HCl on Mars was the result of a dust storm that hit the planet back in 2018. Chlorine-based gases sometimes indicate volcanic activity, but the HCl was found in the northern and southern hemispheres of Mars at the same time, and no other volcanic gases were detected. Therefore, the gas appears to be linked to an entirely new surface–atmosphere interaction driven by dust seasons on Mars.

Similarly to here on Earth, in the Martian environment sodium chloride – remnants of evaporated oceans and embedded in Mars’ dusty surface – appears to be lifted into the planet’s atmosphere by winds. The HCl that was identified disappeared surprisingly quickly at the end of the 2018 dust season, and there are indications that it could return again the next year, Esa said. 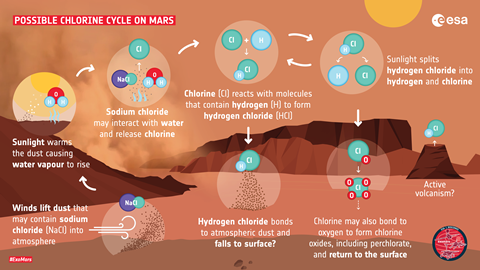 ‘You need water vapour to free chlorine and you need the by-products of water – hydrogen – to form hydrogen chloride. Water is critical in this chemistry,’ Olsen explained. ‘We also observe a correlation to dust: we see more hydrogen chloride when dust activity ramps up, a process linked to the seasonal heating of the southern hemisphere.’ Further reactions could see the chlorine or hydrochloric acid-rich dust return to the surface, perhaps as perchlorates, the agency suggested.

‘Regardless of the HCl origin, it appears unlikely that the processes responsible for its production and destruction would not affect the rest of Mars’s atmospheric chemistry,’ the ExoMars team concludes. ‘Our discovery suggests that the martian photochemistry should be revised, considering reactions with atmospheric dust or surface outgassing.’

One aim of such Mars exploration is to identify atmospheric gases that are indicative of biological or geological activity, to determine if the planet was ever capable of hosting life. Another goal is to elucidate how much water was and is on Mars, to help gauge its habitability.

ExoMars not only found HCl in Mars’ atmosphere, it also detected three instances that accelerated water loss from the atmosphere, including the global dust storm of 2018, as well as a brief but forceful regional storm in January 2019 and water release from the south polar ice cap during summer months linked to seasonal change. In particular, Esa pointed to a plume of rising water vapour identified during summer in the southern hemisphere that would potentially inject water into the upper atmosphere on a seasonal and annual basis.

It is not entirely unsurprising that there is HCl on Mars, given that another chlorine compound – perchlorate – was detected on Mars in 2008.