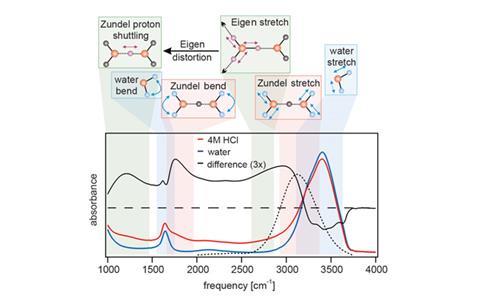 Proposed by the German chemist Theodor Grotthuss in 1806, the mechanism is governed by the constant conversion of covalent and hydrogen bonds between water molecules, which allows for the transport of positive charge across a solution. Researchers believe this long-range interplay forms the basis of many acid–base reactions, removing the need for them to be in close proximity before excess charges can jump across.

But there has been widespread disagreement on which cations form the basis of this proton chain. Now, using ultrafast IR spectroscopy to excite O–H bond stretching in hydrochloric acid, Martin Thämer and his colleagues at the University of Chicago have discovered that the Zundel complex, [H(H2O)2]+, may be responsible. In the complex the proton is equally shared between two water molecules, before the charge is passed on to another molecular pair.

The team acknowledge, however, that the result does not preclude positive charges from transferring between a Zundel cation and the heavier Eigen cation, H3O(H2O)3+.