Why do ice cubes float in cooling summer drinks, rather than sinking? The simplest answer is because ice is less dense than water, but scientists have been unable to provide a precise theoretical explanation – until now.

Using machine learning, Tobias Morawietz and his colleagues from the University of Vienna, Austria, and Ruhr-University Bochum, Germany, have simulated water molecule interactions. Beyond solving the density puzzle, they think they are the first to accurately calculate ice’s melting point from fundamental quantum mechanics. ‘These results highlight the importance of van der Waals forces and demonstrate the predictive power of ab initio molecular dynamics simulations,’ says Morawietz.

As water moves from higher (left panel) to lower temperature (right panel), the distance of the central molecule (green) to the first shell water molecules (red) decreases and the distance to the second shell (blue) increases

Ice occupies a larger volume than liquid water because hydrogen bonds hold water molecules in a rigid 3D network. When ice melts, those bonds weaken and water molecules can get closer, becoming densest at 4°C.

To understand these processes chemists can use ab initio molecular dynamics approaches based on density functional theory (DFT). However, such calculations are too intensive to simulate more than a few picoseconds – or trillionths of a second – when nanosecond duration periods, a thousand times longer, are needed. Worse still, DFT doesn’t accurately reproduce tiny but crucial van der Waals forces. 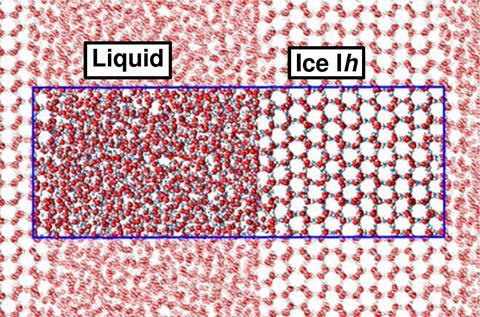 Cooling water strengthens the hydrogen bond network, pulling the nearest shell closer, although while it’s liquid some intruder molecules remain. After further cooling, the rigidifying network rejects the intruders. This competition between the nearest shell’s contraction and the intruding molecules causes the 4°C density maximum. ‘Only if van der Waals forces are correctly taken into account does the hydrogen bond network have the right flexibility to allow second-shell molecules to move in and out of the first solvation shell,’ says Morawietz.

The University of Tennessee’s David Keffer cautions that the study sacrifices a fine-grained approach for a coarser one to get better computational efficiency. ‘Often individuals interested in questions that can only be resolved with finer resolution question coarser techniques,’ he underlines. Nevertheless, here the trade-off provides ‘a soundly-based improvement’ to water modelling, Keffer says.