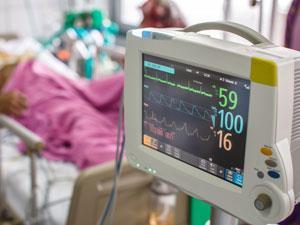 Measuring 13C isotope levels in the breath of paediatric patients could save lives by giving an early indication of sepsis.

More than 30,000 cases of severe sepsis are estimated to occur in the UK every year. But Daniel Bütz and co-workers at the University of Wisconsin-Madison, US, are seeking to fight these figures.

As for many conditions, early identification increases survival rate – however, this is not easy. Existing methods to check for sepsis either lack the sensitivity needed for early detection or are both expensive and invasive.

The team have correlated the 13CO2:12CO2 ratio in the breath of paediatric patients on ventilators with the severity of their systemic inflammation, specifically their acute phase response.

Exhaled breath content relates to inflammation and sepsis for multiple reasons. Firstly, because lipid oxidation is limited during severe sepsis: a lipid’s isotopic signature is lighter than other macronutrients, so if more lipids were metabolised, more 12C would be present in the exhaled CO2. With less lipid oxidation, the 13CO2:12CO­2 ratio increases.

Secondly, during infection, free amino acids are either broken down to CO2 or used to build certain proteins which are released when inflammation occurs. Compounds containing 13C move through enzyme-catalysed reactions slower than those containing 12C. There is a 50:50 chance of free amino acids with 13C or 12C being selected to make protein. However, multiple enzymes can be involved in breaking down amino acids, so heavier carbon is filtered out, leading to a lower 13CO2:12CO2 ratio.

Paul Monks of the Diagnostics Development Unit at the University of Leicester in the UK highlights the importance of the research: ‘Sepsis – and the resultant shock – is a major cause of death in intensive care. Non-invasive diagnosis would represent a significant step forward.’

The director of the medical intensive care unit at the Medical College of Wisconsin in Milwaukee, Rahul Nanchal, agrees that breath analysis is an intriguing and important research area: ‘Innovative technologies that reliably signal the onset of early acute inflammation in a critically ill patient are necessary and should remain a developmental priority.’