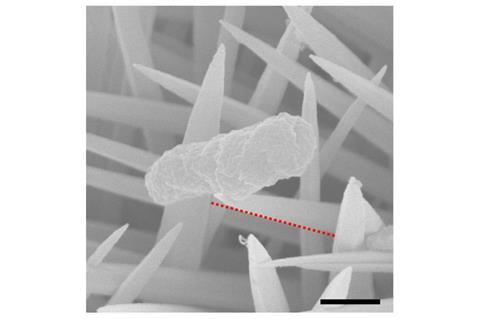 Scanning electron microscopy images show how the nanoclaws act like Venus flytraps, able to trap bacteria in the blood

Nanoclaws that catch bacteria in the bloodstream akin to Venus flytraps ensnaring their prey have been developed by Chinese scientists. The claws could clean the blood of patients who have bacterial infections that can cause life-threatening sepsis. According to the researchers, the claws could potentially catch other blood pathogens, including viruses and cancer cells.

Sepsis is usually triggered by a bacterial infection in the lungs, abdomen or urinary tract. If infection-causing pathogens enter the bloodstream, they can quickly cause inflammation of the whole body leading to multi-organ failure, septic shock and death. With risk of death increasing by around 7% each hour, emergency treatment is critical. It typically involves injecting broad spectrum antibiotics into the bloodstream. However, these can fail to target the unknown pathogen, especially if it has developed resistance.

Cleaning the blood could be an alternative and researchers are exploring ways to isolate specific bacteria or cancer cells in blood using microfluidic or nanowire filtration devices. However, past efforts demonstrated pathogen capture only in static environments using weak chemical bonding between bacteria and a filtering membrane. This means captured pathogens would be released by the force of flowing blood making these approaches ineffective for a clinical dialysis system that needs to keep a patient’s bloodstream flowing.

Tie Wang, who led the work at the University of Chinese Academy of Sciences, explains that the filter is housed in a small plastic tube and is made out of carbonised melamine foam onto which bendy nickel–cobalt nanowires were grown. These were then coated with concanavalin A (Con A) – a protein that binds to clinical pathogens.

To test the nanoclaws, the team pumped human blood that contained Salmonella bacteria from one flask to another through a tube attached to the nanowire filter. The dialyser performed as well as a non-bendy nanowire control at trapping bacteria in slow flowing blood. But when blood was flowing more quickly the bendable nanowires captured 97% of bacteria, compared with only 40% for non-bendy nanowires and 10% for the carbonised foam alone.

The nanowires strike a delicate balance between flexibility and rigidity. Too bendy, and the blood flow would push them out of the way; too rigid and they wouldn’t be able to catch the passing bacteria. With just the right bendiness, they remain straight as blood flows through, but as bacteria touch the nanowires, the Con A coating triggers them to instantly bend and close like a claw.

‘This is a brilliant and innovative way to trap bacteria,’ comments Thanh Nguyen who investigates biomedical nanodevices at the University of Connecticut, US. ‘The authors have employed unique mechanical properties of polycrystalline nanowires which can comply with the bacteria in collision under fluid flow, consequently increasing efficacy of the trapping.’

However, Nguyen points out a limitation: ‘For future applications, the heavy metals of nickel and cobalt used as a precursor to grow the nanowires should be completely removed to avoid contamination of the dialysed blood as these metals are potentially toxic.’