Ionic liquid drugs can rapidly pass through the skin and may open the way to new, more effective medicines, say scientists in Australia. They could also be a solution to some of the most significant problems in the pharmaceutical industry, they say.

Ionic liquids (ILs) are amorphous compounds consisting of a cation-anion pair. One or both of the ions can be derived from pharmaceutically active compounds to create liquid forms of the drugs, which are more stable, soluble and bioavailable than the parent compounds. In some cases, the IL shows an enhanced pharmaceutical effect over the drugs from which it is derived. Also, being amorphous, ILs could be a solution to polymorphic interconversion, where one polymorph of a drug converts to another over time, which affects its properties.

The use of ILs has been limited because they don’t readily permeate skin and other biological membranes, thought to be because they are poorly soluble in lipids. Now, Jelena Stoimenovski and Douglas MacFarlane from Monash University have identified protic ionic liquids (PILs) - in which a pharmaceutically active acid is reacted with a biocompatible base to produce salts with dual activity - that can overcome this barrier. 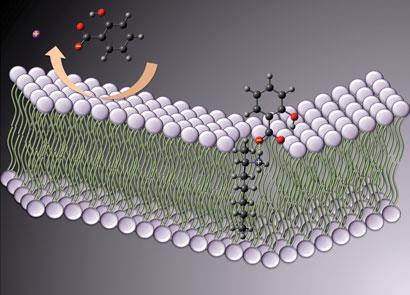 The team used a spectroscopic technique called attenuated total reflectance-Fourier transform infrared (ATR-FTIR) to study how the PILs permeated a silicone membrane, which was designed to mimic skin. ’ATR-FTIR has the ability to quantify multiple species simultaneously in real time,’ explains Majella Lane, an expert in membrane transport and drug absorption from the University of London, UK. The method detects the arrival of a compound on the inside of the membrane minutes or hours after it is placed on the outside.

’The PIL compounds permeate the membrane rapidly, more rapidly even than formulations of the active molecules in solution,’ says MacFarlane. Previous ATR-FTIR studies had examined the transport of drugs that are either weak acids or weak bases, or focused on ion-pair transport. But, MacFarlane’s work ’suggests that [the ionic liquids] are behaving as neutral species,’ says Lane, most likely transported as hydrogen-bonded complexes. She believes the study ’demonstrates that protic ionic liquids offer real potential in the delivery of salt forms of active materials’.

The effectiveness of PILs can be enhanced by choosing ions that associate readily, paving the way to future compounds that can maintain all the benefits of ILs without the disadvantages, says MacFarlane. A different choice of counterion would also allow researchers to register a separate patent, making these drugs a potentially profitable area.