A string of chemical accidents in India’s main chemical industry hub of Gujarat, and elsewhere, raises questions about the industry’s regulation.

On 6 January, six workers died and 22 others fell unconscious after inhaling toxic fumes emanating from waste being dumped illegally from a tanker in the Sachin Industrial Area of Surat. Police arrested four people, including the director of Sangam Enviro, Ashishkumar Gupta. Ashish had been contracted to collect 25,000 litres of a toxic industrial chemical from a company in Taloja, Maharashtra, and transport it for disposal in Surat. 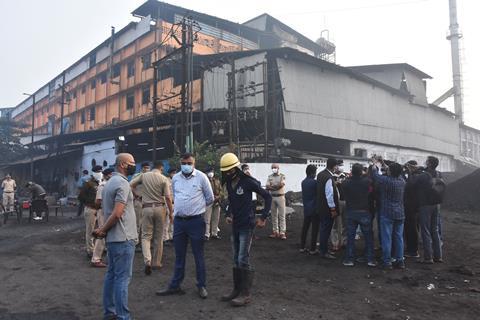 Illegal waste dumping is apparently widespread in India. An incident in Surat led to 6 deaths as gases from waste being dumped from a tanker overwhelmed workers in a nearby textile mill

On 6 December, a young labourer was killed on the spot and five others were injured after a reactor explosion at RP Industries’ manufacturing unit in Ankleshwar. On 16 December, an explosion and fire at state-owned Gujarat Fluorochemicals, located in the Panchmahal district, killed seven and injured at least 15 others. And on 24 December, four people lost their lives and 11 were injured by a boiler explosion at Canton Laboratories in Vadodara.

‘There is a lot of illegal production of chemicals in Gujarat and Maharashtra, over and above licensed ones, and the issues of workplace safety and disposal of effluents remain thorny and neglected,’ explains Krishna Kant, an environmental activist with Gujarat-based Paryavaran Suraksha Samiti (Environment Protection Committee). Plant owners arrange to dispose of their effluents in other areas – often unsafely in remote villages – to avoid being traced or getting caught, he says. ‘Such organised racketeering activities are rampant and known to regulatory authorities,’ he adds.

‘For each one such reported incident, there are at least ten that go unreported and even if someone is caught, there is hardly any action’, says Kant. Large scale contamination of land and rivers is taking place, not just in Gujarat, but all over India, he adds.

‘One of the problems is that instead of implementing the stringent laws that exist to control pollution, regulatory agencies are resorting to executive orders, diluting strong legal provisions with miniscule, ineffective penalties’, says Kant.

Toxics Watch, a non-profit that has been tracking ship-breaking activities at Alang in Gujarat, says both the central and state governments have ignored the arrival in India of end-of-life ships carrying banned and hazardous substances. This is despite India being a signatory to the Basel Convention on the control of transboundary movements of hazardous wastes and their disposal. ‘Roughly 70% of end-of-life ships that Europe sends out end up in India. 90% of those are in Alang, causing serious marine and other pollution,’ says Gopal Krishna, director of Toxics Watch Alliance. An illegal black market in hazardous waste also thrives, he says.

Similar problems are seen countrywide. In the north-easterly state of Bihar, plans are in place for a hazardous chemicals and biomedical waste incineration plant, to be built by Hyderabad-based Ramky Enviro-Engineers. The plant would incinerate 50,000 tons/month of waste from 98 industrial units across Bihar. Local residents and Toxics Watch have petitioned central and state governments, expressing concerns about groundwater depletion, air and water pollution and health threats from release of dioxins and furans from plastic waste burning.

For each one such reported incident, there are at least ten that go unreported

Critics are unanimous that prime minister Narendra Modi and his government’s obsession with ‘ease of doing business’ rankings have played havoc with environmental protection. ‘Self-regulation by businesses is the new mantra, and the government agencies are merrily abdicating their regulatory role to promote business interests blindly, notwithstanding huge social and environmental costs’ says Dinesh Abrol, former professor at the Institute for Studies in Industrial Development, New Delhi.

‘There has been serious tinkering and dilution of laws in the past several years, more so under Modi’, says Gopal Krishna. ‘Hazardous waste management rules under the Environment Protection Act, for example, have been amended so many times that they have lost their meaning and intent,’ he adds.

‘It seems we have not learnt anything even from the worst chemical accident – the Bhopal Gas Disaster of 1984,’ says ND Jayaprakash, co-convenor of Bhopal Gas Peedit Sangharsh Sahyog Samiti, a non-profit organisation working for gas victims. ‘Although cosmetic changes have happened on paper, things are actually worse than before,’ he adds. After 38 years, criminal cases are still dragging through Bhopal’s courts for prosecution of Indian and foreign subsidiaries and officials of the former Union Carbide Corporation.

‘India is currently witnessing a serious governance crisis, wherein the parliament and state legislatures are increasingly becoming dysfunctional and being turned into rubber stamps,’ says Abrol. ‘Important legislation is being passed via brute majority with hardly any discussion or reference to expert committees in parliament. These developments are having harmful effects on the ground, as existing regulatory safeguards are being subverted,’ he says.