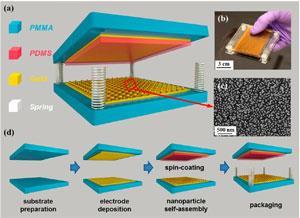 The prospect of recharging your laptop battery with energy derived simply from walking has moved, almost literally, a step closer with new research from the US and China where scientists have developed a novel generator that can produce significant amounts of electrical power from static electricity.

Every schoolchild knows about how static electricity can be generated when two different materials are rubbed together – such as hair and a plastic comb – but over the centuries people have struggled to harness this phenomenon, called the triboelectric effect, as a useful source of power.

Now, a team led by Zhong Lin Wang, of the Georgia Institute of Technology in Atlanta, has designed a device that can do just that. The researchers coated a polymer surface with a thin film of gold, and covered it with gold nanoparticles. Above this surface, suspended on tiny springs with a gap of a millimetre or so, is a second polymer surface, coated with a gold film. The two gold surfaces are connected by wires to an external circuit.

‘When the two surfaces are pressed together, friction is generated and this causes the triboelectric effect,’ says Wang. ‘One side gains electrons, the other side loses electrons.’ When the surfaces are then parted, the charge remains separated and can be siphoned off through the external surface to do useful work. When the load is reapplied and the two sides touch once more, the process is repeated.

Using a 5cm2 single-layered device, the team was able to illuminate an array of 600 commercial LED lights, producing peak power of more than 1W, by simply stepping on and off the generator. Such a system could be incorporated into a shoe, or under a pavement. If the system was scaled up, a single-layered generator of one square meter could produce more than 300W; many of these in turn could be stacked into much larger devices, where the cyclical loading could come from, for example, car wheels, wind or waves, says Wang.

‘By using a surface coated in nanoparticles we increase the surface area and improve the charge transfer,’ says Wang. ‘It need not be gold – pretty much any metal would work.’

Paul Mitcheson, an expert in energy harvesting at Imperial College London, notes that the average power yield of the device is markedly lower than the peak power. Mitcheson adds, ‘It is also important to note that harvesting energy from foot fall and rolling wheels on vehicles is not free: for small energy being harvested, the effect on the person or vehicle will be small, but as the amount of energy harvested increases, the person will find it harder to walk and the fuel efficiency of a car would reduce.’