Nanogenerator made from everyday material could rub out recharge issues 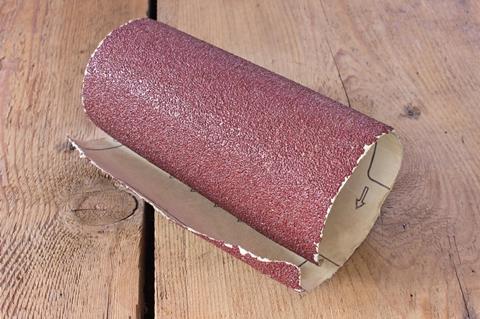 Researchers in South Korea have developed a method to turn common sandpaper into an electrode that generates current from friction, promising a way to power portable devices with ambient mechanical energy.

Wirelessly powering small devices by harvesting energy from the environment could eliminate the need to ever recharge them. This is especially useful for embedded sensors as they will often be located in inaccessible places without a power supply, for example, on the inside of machines or the side of buildings.

Now, Daewon Kim at the Korea Advanced Institute of Science and Technology (KAIST) and colleagues have developed a new method to produce a triboelectric generator – a device capable of producing an electrical current from friction. They took common sandpaper and treated it in a two-step process. In the first step they coated the surface with a catalyst. In the second step they dipped the sandpaper into an aluminium solution. The catalyst on the sandpaper causes the aluminium to react and adhere, forming a thin and uniform surface. This coarse aluminium electrode is sandwiched between two plastic plates separated by springs to form an essential component in the generator.

‘One day I was polishing a metal bar with sandpaper; that was when I suddenly came up with this idea,’ recalls Kim. ‘By directly using commercialised products with intrinsic surface structures, instead of preparing such structures in our lab, we could significantly save fabrication costs, time and labour.’

A triboelectric generator based on Kim’s design, with a footprint of only a few square centimetres, may be able to continuously power wireless sensor nodes. Kim now intends to produce such devices, and test them in real situations. Ultimately, he hopes to establish a company for energy harvesting devices.