Getting the measure of transition states 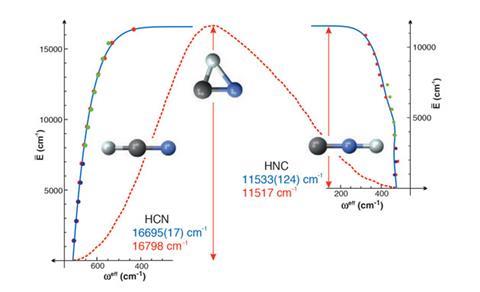 The group studied isomerisation of an electronically excited state of acetylene. Acetylene is linear in its ground state, but when an electron is excited from the triple bond the molecule bends to be either cis or trans. Tuneable laser spectroscopy was used to study interconversion between the two conformers, and the pattern of vibrational energy levels. As the energy levels increase the patterns break down, with molecules showing vibrations at lower frequencies than expected. ‘By measuring patterns in the energy levels revealed in a spectrum we are able to both determine the energy of the top of this barrier and describe something about the structure or the shape of the molecule at the transition state,’ explains Field.

Baraban hopes that this work will eventually be scaled up to more complicated systems. ‘There are only ever going to be a few vibrations that are related to the motion that takes you from reactants to products. You can do this analysis just for those few modes – that doesn’t mean it’s going to be easy in a larger system, there are all kinds of complications, but it does mean that it’s not hopeless. I hope that people will design other kinds of experiments and other kinds of new spectroscopic techniques that might be able to scale to larger systems.’

Donald Truhlar of the University of Minnesota, US, says that the work is a ‘significant advance’. ‘Field and co-workers have made stimulating progress by showing that spectator modes need not prevent observation of interesting effects in reaction–coordinate modes.’ He warns that extending the work will not be easy. ‘A challenge in extending this method to more complex isomerisations will be finding cases where the passage between the two minima is coherent and with no vibrational decoherence due to intramolecular vibrational relaxation.  In some respects that will limit it to double minima of spectroscopic interest rather than to isomerisations where kinetics can be measured and transition state theory can be applied.’