Many seemingly unrelated scientific techniques, from NMR spectroscopy to medical MRI and timekeeping using atomic clocks, rely on measuring atomic spin – the way an atom’s nucleus and electrons rotate around each other. The limit on how accurate these measurements can be is set by the inherent fuzziness of quantum mechanics. However, physicists in Spain have demonstrated that this limit is much less severe than previously believed, measuring two crucial quantities simultaneously with unprecedented precision. 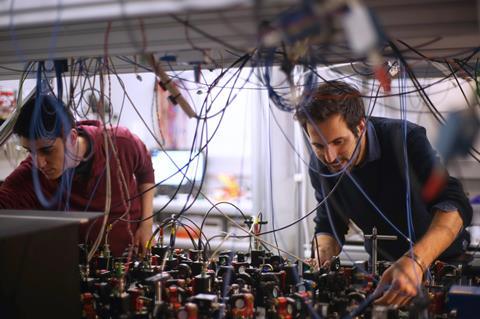 With the right experimental setup, different spin properties can be measured simultaneously

Central to the limits of quantum mechanics is the Heisenberg uncertainty principle, which states that it is not possible to know a particle’s position and momentum with absolute accuracy, and the more precisely you measure one quantity, the less you know about the other. This is because to measure its position you have to disturb its momentum by hitting it with another particle and observing how the momentum of this second particle changes. A similar principle applies to measuring a particle’s spin angular momentum, which involves observing how the polarisation of incident light is changed by the interaction with the particle – every measurement disturbs the atom’s spin slightly. To infer the spin precession rate, you need to measure the spin angle, as well as its overall amplitude, repeatedly. However, every measurement disturbs the spin slightly, creating a minimum possible uncertainty.

The alternative approach suggested by Morgan Mitchell’s group at the Institute of Photonic Sciences (ICFO) in Barcelona, could circumvent this problem. The spin angle, they say, is in fact two angles: the azimuthal angle (like longitude on the Earth’s surface) and the polar angle (like latitude). To measure the precession rate, you need only the azimuthal angle. Therefore, by loading as much uncertainty as possible into the polar angle, you can measure the two quantities you need – the azimuthal angle and amplitude of the spin – and therefore measure the spin precession rate much more accurately than previously thought possible. ‘There are experiments that people are doing now that people expect to be limited by the Heisenberg uncertainty principle which in fact are not,’ says Mitchell.

Actually achieving this in practice, however, proved extremely difficult. The team cooled down a cloud of atoms to a few microkelvin, applied a magnetic field to produce spin motion and illuminated the cloud with a laser to measure the orientation of the atomic spins. ‘Not all the technologies we used for the experiment existed when we started,’ says Giorgio Colangelo, another member of the research team. ‘We had to design and develop a particular detector that was fast enough and with very low noise. We also had to improve a lot the way we were preparing the atoms and find a way to efficiently use all the dynamic range we had in the detector.’ The researchers hope that atomic timekeeping and nitrogen-vacancy magnetometry, which uses the precession of nitrogen defects in diamonds to measure magnetic fields, may benefit from the techniques unveiled here in the next few years. ‘We really hope that, in the long term, magnetic resonance techniques such as NMR and MRI may benefit, but right now they are limited by some other effects,’ says Colangelo.

Eugene Polzik of the University of Copenhagen in Denmark is impressed: ‘It sets a new and clever way of measuring certain magnetic field disturbances using an ensemble of quantum spins,’ he says. ‘It would be easy for me to look at this and say “Oh, yes, right: it doesn’t contradict quantum mechanics,” but to figure out how to achieve this, to understand how relevant it is and under what circumstances it is relevant – this is an excellent and elegant development.’