Getting under water's skin 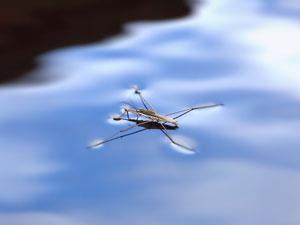 The surface tension of water is explained in textbooks with pictures showing water molecules pulling each other sideways and downwards at the liquid surface, producing a kind of surface ‘skin’. However, this image is incomplete, according to a study by Angus Gray-Weale and colleagues at the University of Melbourne, Australia.1 They say that if water’s surface tension were indeed just a question of attractions between water molecules, it would be even larger than its already unusually high value of 72 millinewtons per metre. The value is somewhat reduced, they say, because the surface relaxes as hydroxide ions accumulate there, making the water surface negatively charged.

This relaxation of the interface was seen experimentally as long ago as 1926. At that time, two researchers at the University of Heidelberg, Germany, used a method of measuring surface tension developed by Lord Rayleigh and by Niels Bohr in his early work. The studies showed that the surface tension of a freshly prepared water surface is 11–39% greater than its usual value, to which it relaxes in a millisecond or less. That was borne our by more recent experiments and Gray-Weale and colleagues set out to explain this anomaly.

Previous studies have indicated that the surface of water is negatively charged.2 There are various possible reasons for this. Perhaps contaminant anionic surfactants, such as carboxylates, accumulate. Or maybe there is a preferred orientation of water-molecule dipoles at the surface. But the team, led by James Beattie at the University of Sydney, Australia, has long argued that hydroxide ions gather at the air–water interface, making the surface alkaline.3

To distinguish between these possibilities, Gray-Weale, Beattie and their colleague Maoyuan Liu calculated the timescales involved. Dipole orientation would be extremely rapid, happening in just picoseconds. In contrast, diffusion of surfactants should take at least several seconds. The time taken for water molecules to dissociate into hydrogen and hydroxide ions, and for the latter to accumulate at the surface, meanwhile, is of the order of around 0.3ms for neutral or slightly alkaline pH, agreeing nicely with the measured relaxation time of the surface tension.

The researchers think that the layer of hydroxide-enriched water extends up to a nanometre or so from the surface, and that below this there is a corresponding layer of enhanced hydrogen-ion concentration. The effect of this ‘double layer’ of charge on the surface tension is analogous to that of a surfactant. ‘The formation of the charged double layer lowers the surface tension, just like the adsorption of typical soap-like amphiphilic surfactants,’ the team says.

Beattie’s assertion that the air–water interface is alkaline has previously aroused controversy. Some computer simulations and experiments have suggested that, in contrast, the bare water surface is acidic.4,5 ‘We're not saying that protons don't have a surface affinity,’ says Gray-Weale, ‘but experiments do suggest that the hydroxide's surface affinity is much stronger than the proton's. I think the message is that we need to rely on experimental information to resolve this. Simulations shouldn't be trusted too far.’

Douglas Tobias, a theoretical chemist at the University of California at Irvine, US, finds some aspects of the work perplexing, such as the large binding energy for hydroxide absorption at the surface. ‘This value is puzzling to those of us who think of water interfaces at the molecular level and the authors do not explain it.’

He is also puzzled by the density of hydroxide ions that the Melbourne team deduces at the surface. ‘This parameter seems way too high, as it implies that there is roughly one hydroxide anion for every 10 water molecules in the surface layer of neat water, where the bulk hydroxide concentration is many orders of magnitude lower.’

‘All things considered, I don't think this paper moves the field any further toward resolution of the controversy,’ Tobias says. ‘It is another brick in the wall that separates the two camps’ – namely, those who rely on macroscopic measurements like those here and those who perform microscopic simulations and experiments.

Gray-Weale admits that ‘I don't think our paper is the final word’. He adds: ‘I would really like to see a more direct method reveal the presence of hydroxide at the surface. There have been a few spectroscopic studies, but none are really conclusive, usually because they can't access realistically low concentrations.’