Why are proteins left-handed and nucleic acids right-handed? That’s long been one of the biggest puzzles in understanding how life began, and for decades all scientists had to play with were a few sketchy theories.

But over the past few months, scientists seeking answers have suddenly found themselves spoilt for choice, thanks to the discovery of new ways to amplify a tiny imbalance between the two chiral (handed) forms of an amino acid into an almost total dominance of one over the other.

The building blocks of proteins and nucleic acids - amino acids and nucleotides respectively - have two forms (enantiomers) that are mirror-images, but otherwise identical. Just about any chemical reaction that could have produced these molecules on the early Earth would make both enantiomers equally, producing a racemic mixture, yet biology uses only ’left-handed’ amino acids to make proteins, and ’right-handed’ nucleotides to make DNA and RNA. So how did life go from a state of equality to the exclusive preference it shows today?

One of the most promising explanations was put forward in 1953 by chemical physicist Charles Frank, who proposed that a reaction in which an enantiomer acts as a catalyst for its own formation, while suppressing the formation of the other enantiomer, could amplify an initial small imbalance indefinitely. Any initial excess of one enantiomer is boosted by the combination of positive feedback and inhibition so that the enantiomeric excess (ee) rises on each catalytic cycle. Nobody knew of such a reaction until the Japanese chemist Kenso Soai of the University of Tokyo and his colleagues reported in 1995 that a reaction between an aldehyde and an organozinc compound fitted the bill. This produced a chiral alcohol from non-chiral starting materials - but adding a small amount of one enantiomer of the alcohol created a high ee in the final product. The alcohol, in other words, seemed to catalyse its own formation in an enantioselective manner.

The precise mechanism was worked out in 2001 by UK researchers Donna Blackmond, then at the University of Hull, John Brown, at the University of Oxford, and their coworkers. Crucially, it involves the chiral products pairing up as dimers that act as catalysts. It turns out that the homodimers - pairs of identical enantiomers - are more catalytically active than the heterodimers, which unite mirror-image forms of the alcohol. Formation of this heterodimer acts as the inhibition process that was essential to the Franks model - in effect, it takes out the minority enantiomer and means that the ee gets bigger on each round of autocatalysis. But it’s scarcely likely that the origin of life was catalysed by organozinc molecules. And as Blackmond points out, ’a lot of things have to happen at once’ to make it work.

But now the Frank scheme has competition. Blackmond, currently at Imperial College in London, and her coworkers have found that homochirality can emerge in a totally different way, involving not a chemical but a physical process: crystallisation. Last year they discovered that the ee of a solution of the amino acid proline can be boosted from just a few per cent to 100 per cent when it crystallises.1,2

Most amino acids crystallise as racemic mixtures. But if one enantiomer is present in slight excess, then some of the crystals will contain only that enantiomer. Over time,   a mixture of racemic and enantiopure crystals will accumulate at the bottom of the container, while the ee of the molecules left behind in solution grows until it reaches an equilibrium point called the eutectic. If more of the dominant enantiomer is added, it will just get shunted into the enantiopure crystals; if more of the minority enantiomer is added, it co-crystallises with its mirror image into the racemic crystals. The value of the eutectic ee varies from one amino acid to the next: for proline it is about 50 per cent, while for serine it is 99 per cent. Thus the size of the chiral imbalance in solution seems to be fixed by nature - it appears we can get some chiral enrichment, but only as much as nature allows. 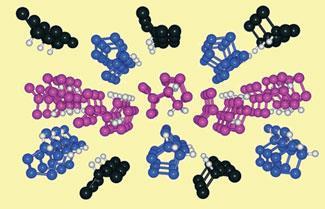 But Blackmond and colleagues found they could vary the ee of such solutions by precipitating crystals that incorporate another small organic molecule. When proline is precipitated in chloroform, for example, the ee of the solution rises to over 99 per cent. This is because some chloroform molecules get incorporated into the racemic crystals, which they stabilise by hydrogen-bonding to the amino acids. That makes the crystals much less soluble, so that most of the proline gets removed from solution in an equal mixture of enantiomers, making any initial imbalance more pronounced: the eutectic point is shifted. Blackmond’s group is now searching for other small molecules of more prebiotic relevance - urea and formaldehyde, say - which might have the same effect as chloroform. The great thing about getting homochirality from an equilibrium model like this is that ’we have time on our side’, explained Blackmond. Cycles of rain, evaporation and precipitation on the early Earth could produce an almost homochiral pool of amino acids, which might take part in other biologically important reactions.

Graham Cooks and his colleagues at Purdue University in Indiana, US, have reported an even simpler physical mechanism for enriching a near-racemic mixture of amino acids with the majority enantiomer. They found that when serine crystals with an ee of three per cent are heated until they sublime, the vapour has an ee of up to 98 per cent. This vapour can be condensed into an almost enantiopure solid.3 The researchers attribute this effect to the formation of clusters of eight serine molecules (octamers) in the gas. The octamers only fit together if they all have the same chirality - in this case, left-handed. In effect, the formative clusters selectively pluck the majority enantiomer out of the subliming crystals. If all the serine was sublimed, it would just segregate into homochiral clusters with the same average composition as you started with. But clusters of the majority enantiomer form faster, and so the initial sublimate consists almost entirely of these. Cooks and colleagues think that if serine was enriched in this way on the early Earth it could seed a chiral imbalance that might be passed on.

His team has found that some serine molecules in the clusters can be substituted for other small chiral molecules, provided that they too have the right chirality.   For example, Cooks suggests that in a volcanic setting where the warm temperatures could trigger sublimation of amino acid crystals, hydrogen sulfide could convert some serine to cysteine, and left-handed-cysteine might then be selectively included in the octamer. ’The simplicity of the chemistry both for amplifying and transmitting chirality favours its operation as a natural process,’ he told Chemistry World.

Simply sublime: how to enhance the enantiomeric excess of serine

’This work could turn out to be very important,’ said David Clemmer, an expert in analytical science at Indiana University, Bloomington, US. ’This adds to the mounting evidence that some amino acid clusters appear to be especially stable and readily formed, and should be considered in models that aim to explain homochirogenesis.’

Even more alternatives for creating homochirality are emerging. Blackmond is currently working with Spanish geologist Cristobal Viedma, of the Complutense University of Madrid, Spain, who showed last year that a combination of stirring and abrasion can create a kind of ’physical autocatalysis’ that makes chirally pure crystals from small achiral molecules or ions that crystallise in a chiral manner, as quartz does. All these findings don’t just open up new ways of accounting for biology’s single-handedness. Making single   enantiomers is vitally important to the pharmaceutical industry, so there could be commercial applications. However, both systems do leave one question unanswered: where would the initial imbalance in enantiomers come from on the prebiotic Earth? Some think photochemistry moderated by differences in the relative amounts of circularly polarised sunlight could be responsible; others argue that even the minuscule left-right asymmetry in the operation of the weak nuclear force could be enough to sow the seed. Or perhaps the asymmetry was random, differing between sites until one dominant enantiomer overwhelmed the other. Moreover, setting up the amplification conditions to truly mimic those of the prebiotic Earth is another challenge yet to be faced. But for now, there’s no lack of handy ideas.

Philip Ball, with additional reporting by May Copsey