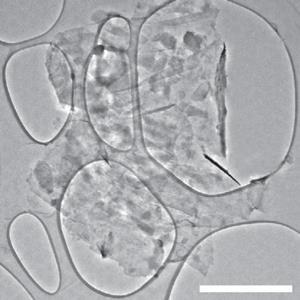 A new material comprising interspersed layers of graphene and phosphorene has been shown by US researchers to be a more stable, more conductive and higher capacity anode for sodium ion batteries than previous materials. The researchers believe it could be industrially compatible, and potentially allow sodium ion batteries to become useful for large-scale energy storage.

Lithium-ion batteries have revolutionised portable electronics thanks to their high charge capacity, but the high cost and geopolitical insecurity of lithium supplies (most of the easily mined salts are in countries such as Chile and Bolivia) present a problem. Sodium-ion batteries present a potentially attractive alternative as sodium is 90% cheaper and widely found all over the world. The Na+ ion, however, intercalates less easily into anode materials. Lithium-ion batteries traditionally use graphite anodes, into which Li+ ions reversibly intercalate. The inter-planar distance in graphite is only 1.86Å, however, whereas the Na+ ion is 2.02Å, so graphite is electrochemically inactive in a sodium-ion solution. Possible alternatives have proved unsatisfactory.

One such alternative is black phosphorus, which has sufficient interlayer distance of 3.08Å and a high theoretical specific charge capacity of 2596mAhg-1 as it forms Na3P. But it rapidly decomposes when tested because of its large volume expansion when it takes up Na+ ions. In the new research, Yi Cui and colleagues at Stanford University in California have developed a nanostructured hybrid comprising interspersed phosphorene and graphene. The graphene layers provide an elastic buffer and function as an electrical highway, allowing charge to get in and out faster. The phosphorene and graphene were both produced by scalable liquid exfoliation, and the sandwich structure self-assembled when suspensions of the two components were mixed and the solvent was evaporated.

The material had an initial specific capacity of 1178mAhg-1, 94% of its theoretical maximum capacity, and retained up to 83% of this after 100 charge/discharge cycles. Cui's group is now working to improve this further, and Cui says that, if it can increase the life to 3000 cycles, the technology could be ‘very attractive for large-scale stationary energy storage’ of electricity in the national grid.

Stefan Freunberger of the Technical University of Graz in Austria describes the research as ‘interesting’ but warns that the researchers will face a further obstacle to improving the cycling performance. All known electrolytes are thermodynamically unstable during intercalation in alkaline ion batteries, he says. Li-ion anodes rapidly form a 'passivation layer' that sticks to the anode and protects the electrolyte, but this partially breaks down in Na-ion batteries every time the battery is discharged. Therefore, he says, 'there is much more side reaction than in the case of the lithium'. The high surface area of graphene could even make the problem worse, he adds.