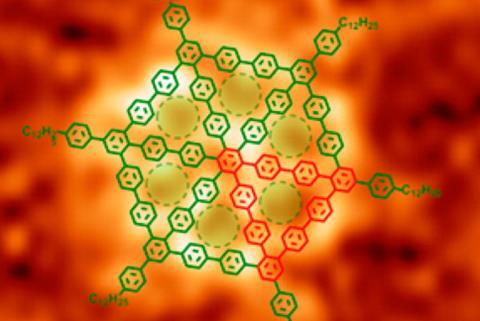 Scientists in Germany and Belgium have rolled a new 2D structure into the burgeoning field of flat carbon materials – the polyphenylene ‘spoked wheel’.

Since the discovery of graphene in 2004, researchers have been exploring the 2D molecular space to create new structures with exotic properties. From silicene to phosphorene, molecular monolayers are being touted as an alternative to conventional semiconductors and transistors. But they are often hard to produce, with current manufacturing processes only producing small amounts.

Now, Yi Liu from the Max Planck Institute for Polymer Research, Germany, and his colleagues, are trying to build a new class of 2D carbon materials from the ground up.The team has made a polyphenylene structure that resembles a spoked wheel with six internal pores and at least 22 benzene rings. Liu’s group built the structure through an alkyne trimerisation with a cobalt catalyst.

Viewable under a scanning tunnelling microscope, the wheel maintains its shape and could be used as a building block to create a large 2D polyphenylene dubbed graphenylene. The wheel’s pores could also act as host sites for bromine or iodine ions.