Batteries made safer with fire-extinguishing electrolytes

Fire-resistant battery electrolytes that perform just as well as – and sometimes better than – those currently in use, have been developed by researchers in Japan.

Lithium-ion batteries are at the heart of modern consumer electronics owing to their high voltage and charge density. But the flammable organic electrolytes they contain make them a safety hazard. And the development of sodium-ion batteries for grid storage of renewable energy has been held up over fears that runaway exothermic reactions might propagate through large banks of cells.

Normally the electrolyte in an alkali-ion battery comprises a dilute solution of the alkali metal hexafluorophosphate in a highly flammable mixture of ethylene carbonate and diethyl carbonate. During the first charging cycle, electrolyte decomposes on the anode, forming a thin ‘passivation’ layer that stabilises the battery during subsequent use. Researchers have previously tried adding flame-retardant chemicals such as trimethyl phosphate to the electrolyte, but they found that the resulting electrolyte did not properly passivate the anode. ‘If there is no passivation film,’ explains Atsuo Yamada from the University of Tokyo. ‘then, upon charging, the electrolyte is continuously decomposed to generate gas’. 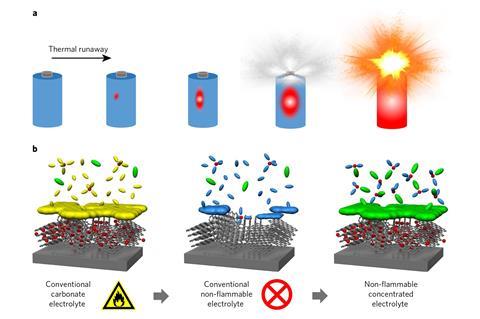 The non-flammable electrolytes Yamada and colleagues developed contain higher concentrations of salts, which form a stable passivation layer on the anode

Yamada and colleagues produced completely flame-retardant lithium and sodium ion batteries by making alternative electrolytes containing the bis(fluorosulfuryl) imide salt of the appropriate metal dissolved in pure trimethyl phosphate. Crucially, they used much higher salt concentrations than are used in today’s commercial batteries, or in previous experiments. When tested, their electrolyte formed a stable passivation layer on the anode despite the absence of any carbonate electrolyte: chemical analysis showed that this passivation layer had been caused by decomposition not of the electrolyte, but of the salt itself.

The sodium-ion battery they made retained 95% capacity after 1,200 cycles, which was far superior to the conventional carbonate electrolyte version, whose capacity decayed significantly after 200 cycles. Their lithium-ion battery performed comparably to test cells using the same chemistry as commercial mobile phone batteries. Yamada cautions that real tests would need to be applied to optimised commercial products, and his university team do not have the capacity to produce these themselves. He concludes, however, that developing such cells is ‘worth trying’.

Rosa Palacín of the Institute of Materials Sciences (ICMAB) in Barcelona, Sapin, says that high-concentration electrolytes are being explored for other possible advantages such as voltage stability. ‘It is a concept that has, for the past few years, been attracting the attention of the scientific community in battery research,’ she tells Chemistry World, ’Now this concept appears to have an additional advantage that was not generally identified.’

‘More research will have to be done to determine whether this approach can be implemented in commercial batteries in the longer term,’ she adds. ‘But I think it is an interesting pathway to follow.’