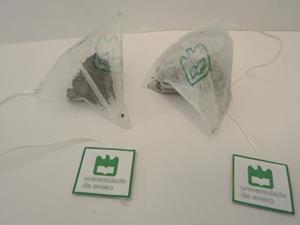 Water-cleaning tea bags containing a porous graphene oxide foam have been developed by researchers in Portugal, who say they can help purify water by removing dissolved mercury.

Paula Marques and colleagues at the University of Aveiro synthesised the foams by heating graphene oxide with ammonia to create a porous 3D material with a high surface area. After screening their materials for their ability to adsorb various toxic pollutants, the team chose to focus on mercury, one of the top three on the EU’s priority list of hazardous substances in water.

‘We put it in a tea bag because sometimes the foam breaks apart. The shape also optimises contact with water – I guess that’s why they make teabags like that!’ says Marques, who was presenting the work with colleague Gil Gonçalves at Graphene Week 2015, a conference run by the European commission’s Graphene Flagship initiative in Manchester, UK.

The teabag prototypes can remove 96% of the mercury dissolved in pure water in day, which is better than activated carbon, one of the gold standard techniques for removing the heavy metal. When the team tested samples of river water containing pollutants other than just mercury, the material still performed well, removing 82% of the metal in a day. ‘Performance in sea water is worse – around 42% – because of other positive ions competing for functional groups on the surface,’ says Gonçalves.

Nevertheless, the foams have some significant advantages over existing water purification systems: they are reusable, simple to synthesise, and should be easy to produce in bulk at relatively low cost. ‘They are also not affected by pH,’ Gonçalves adds, ‘which is good because often sorbents need the pH to be optimised, which costs companies.’

The team say their systems could be used to de-contaminate waste water in chemical plants, and are now looking for industrial partners to help them commercialise the technology.

Another potential application is drinking water purification in areas where mercury pollution is a problem, but the team say for this to happen more work is needed. Currently, the European safe level for mercury in drinking water is 1ppb, and so far the graphene oxide teabags are only able to bring it down to 3ppb in samples. ‘Our initial priority is to use this for industry,’ Marques says. ‘But in future we may be able to work more on the graphene oxide surface so that it could be used for drinking water.’