Chinese scientists have developed a new family of safer chemical propellants with the shortest ignition times and lowest viscosities of any ionic fluid rocket fuels to date. 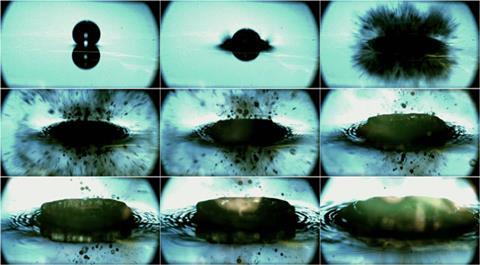 Qinghua Zhang from the China Academy of Engineering Physics, and colleagues, developed the borohydride-rich ionic liquids, which could replace the poisonous and unstable hydrazine-based fuels more commonly used.

To measure the ultra-short ignition times – as fast as 1.7 milliseconds – the team used high speed photography to capture the ionic liquid droplets reacting with liquid oxidant.

Ionic liquids containing borohydride anions such as [BH4]– and [BH2(CN)2]– are leading the way in the search for greener chemical propellants. Their combustive properties result from the borohydrogen-rich counterion, which acts as a vigorous reductant. Despite their powerful potential, existing families have proven difficult to handle on account of their poor stability towards atmospheric moisture. The group’s new bridged anion interacts more weakly with water, giving the fuel greater hydrophobicity and making transport and storage easier.