Halogen bonding – the group 17 equivalent of the hydrogen bond – plays an essential role in molecular structures. They form between a σ-hole – an electron-poor region at the end of a carbon–halogen bond – in one molecule and an electron-rich part of an adjacent molecule. 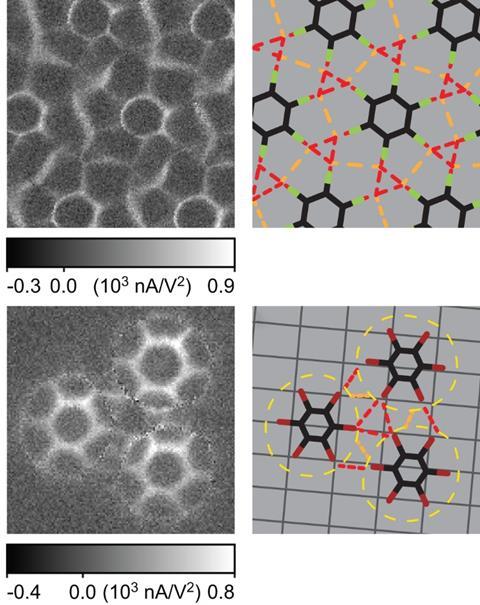 C6F6 (top panels) and C6Br6 moecules self assemble on a silver surface into ’windmill’ shapes, controlled by the triangular arrangements of their intermolecular halogen bonds.

When three halogen-bearing molecules come together, they can form a windmill-like structure in which each σ-hole interacts with the electron-rich belt around the carbon–halogen bond of its neighbour. This curious bonding behaviour has now been captured by researchers from China and the US using a version of scanning tunnelling microscopy.

On a silver surface, both hexafluorobenzene and hexabromobenzene assemble spontaneously into windmill patterns featuring a central halogen bond triangle and additional diagonal interactions between halogens not directly opposite each other.

In 1,3,5-trifluorobenzene, the scientists found three different types of halogen bonds: two types of fluorine–fluorine bond as well as V-shaped bifurcated bonds between one hydrogen atom and two halogens on neighbouring molecules.

This first direct observation of hexafluorobenzene’s bonding behaviour also proves that fluorine can participate in halogen bonding, despite usually being considered not polarisable enough to form σ-holes.