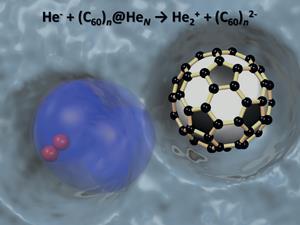 Helium, the most parsimonious element that invariably sits with its arms tightly folded and refuses to participate in chemistry, turns out to be surprisingly generous when it is in the right environment, willing to donate not just one but two electrons to neighbouring species.

Researchers from Austria and the UK made the surprising discovery by generating for the first time isolated dianions – which are inherently unstable and therefore rare – in nanodroplets of helium. The work opens the way to creating other dianions and also to the wider study of helium as an unlikely electron donor.

‘Dianions are important building blocks in chemistry but are often unstable and difficult to make in isolation because of the strong Coulomb repulsion between the two electrons: bringing an electron to an anion has a very high energy barrier,’ explains Jan Verlet of Durham University in the UK, who was not involved in the research.

The team, led by Andrew Ellis from the University of Leicester in the UK and Paul Scheier at the University of Innsbruck, suspended clusters of the fullerenes C60 or C70 in nanoscale droplets of liquid helium, held at just 0.4 degrees above absolute zero, and bombarded the nanodroplets with electrons.

At the specific energy level of the incoming electron beam, mass spectra showed a clear signal for the presence of dianions of both C60 and C70 clusters, as long as there were more than five fullerene molecules within the clusters.

Intriguingly, it appears that two electrons are transferred simultaneously from helium to the fullerene clusters. The researchers suggest the incoming electron beam causes an electron within the helium to be bounced into a higher orbital. This effectively ‘loosens’ the atomic structure, allowing another electron to be accepted, albeit highly weakly bound, to create He-.

When this anion meets a fullerene cluster, it apparently transfers two electrons in a single step. ‘It seems that electrons, despite having like charges, have a tendency to act as a pair under certain conditions,’ says Ellis.

This is the first time that dianions have been seen in superfluid liquid helium. Ellis says: ‘This finding may challenge our understanding of how electrons are transferred in chemical reactions and shows that new and surprising chemistry is possible in superfluid liquid helium.’ In the future it should be possible to stabilise a range of species with solvents before generating their dianionic form in this way, allowing detailed chemistry and spectroscopy, he suggests.

Verlet comments: ‘The idea that the helium anion can be an electron donor provides an exciting new handle to generate exotic molecular species at cryogenic temperatures, which in turn provides the ideal environment to study these new species in unprecedented detail.’