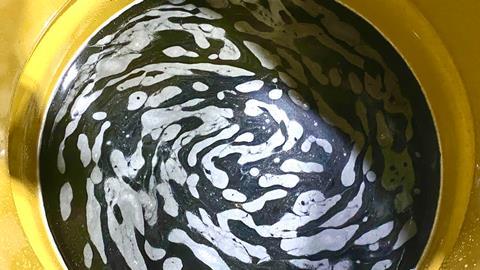 The controversial class of highly fluorinated chemicals known as per- and polyfluoroalkyl substances (PFAS), which are persistent and potentially toxic, has essentially become a new part of the Earth’s ecosystem. There are estimated to be around 8000 different types of PFAS out there – found in the atmosphere, rain, surface water, groundwater and even people – but technological developments now offer to break this cycle.

PFAS have a carbon backbone with multiple carbon–fluorine bonds that are exceptionally strong, making them extremely persistent. These compounds can take as long as hundreds or perhaps even thousands of years to break down1, leading to them being dubbed ‘forever chemicals’ in the media.

These chemicals have been used and manufactured since the 1940s in different industries across the globe. Their unique properties mean they repel oil, grease and water, as well as act as lubricants and resist high temperatures. These qualities have meant they’ve been added to everything from non-stick cookware to raincoats, furniture and firefighting foams.

If they end up in landfill, however, PFAS can seep into groundwater that then discharges into lakes, streams and wetlands. When incinerated, they aren’t always destroyed and can then enter the atmosphere.

PFAS can be removed from water using filtration technologies though. The most common is granular activated carbon – a highly porous material that has a large surface area that contaminants stick to. Many PFAS are hydrophobic, so they tend to adhere to the carbon surface rather than remain in the water.

Other adsorbent technologies to address PFAS include ion exchange resins. Reverse osmosis has also been used to extract these chemicals and uses pressure to force water through a semi-permeable membrane that PFAS cannot pass through.

However, these separation technologies create a waste stream that then needs to be disposed of. This has led to a pressing demand for ways to destroy these persistent chemicals, as bodies like the US Environmental Protection Agency (EPA) are issuing far stricter safety standards for PFAS in drinking water at the parts per trillion level.

‘The new numbers will really put the screws on people to develop new technology, especially on destructive methods,’ says Michael Wong, who chairs the chemical and biomolecular engineering department at Rice University in Texas. ‘The physical methods just won’t cut it anymore, once the numbers become enforceable.’

Another well-known method to rid water of contaminants is supercritical water oxidation, which has a proven track record destroying recalcitrant hazardous substances, like polychlorinated biphenyls.

Once water passes 374°C and 22.1MPa it is considered ‘supercritical’. This state, where the distinction between liquid and vapour is lost, can accelerate certain oxidation processes. When an oxidising agent is added to supercritical water, the water can oxidise a range of organic pollutants. Earlier this year, the EPA showed that supercritical water oxidation reduced total PFAS by more than 99% in a sample, including perfluorooctanoic acid (PFOA) and perfluorooctanesulfonic acid (PFOS).2

Now, the global R&D organisation Battelle has adapted this technology to develop what it calls the PFAS Annihilator. Powered by supercritical water oxidation, its pumps bring contaminated water into the system, where it is mixed with an oxidant. This process can break the strong C–F bonds in PFAS, turning them into inert salts and carbon dioxide. 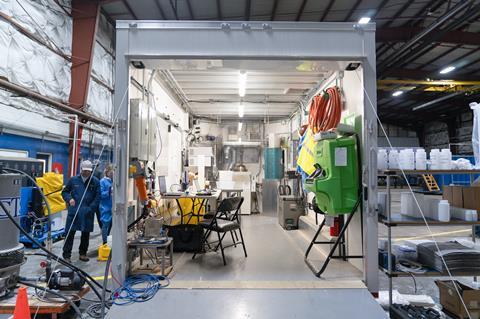 Battelle houses its PFAS Annihilator in either fixed or mobile units that can be deployed for water remediation. Three years of testing shows that this system consistently eliminates more than 99% of PFAS.

Field-testing of the mobile PFAS Annihilator in February proved it could treat more than 2000 litres of PFAS-contaminated liquid per day. Battelle is now constructing a larger system that can treat up to 22,000 litres daily.

University of California, Riverside chemical and environmental engineer Jinyong Liu has been working on methods to destroy PFAS using photochemical reactions. Earlier this year, Liu and colleagues reported that adding iodide to a water treatment reactor that uses ultraviolet light and sulfite destroys up to 90% of C–F bonds in PFAS in a matter of hours.3

That work built on findings last year that oxidation treatments before and after the UV/sulfite treatment can break most C–F bonds in various PFAS chemicals.4 In the new study, Riverside researchers put iodide into the UV/sulfite system to see if it could get rid of a particularly stubborn four-carbon PFAS called perfluorobutane sulfonate (PFBS). The iodide accelerated the reaction and completely removed PFBS within 24 hours.

The UV/sulfite-plus-iodide system also easily degraded other, longer chain PFAS like PFOA and PFOS – the two best-studied of these compounds, which have been linked to health problems like immune system impairment, cardiovascular damage and cancer. 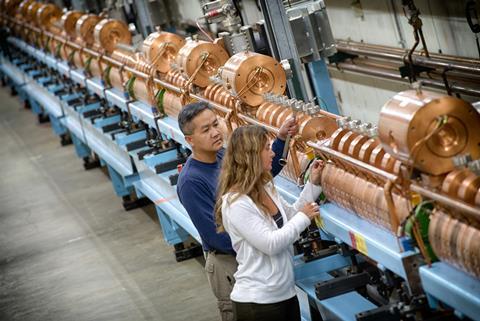 An electron beam produced in a particle accelerator can be used to breakdown PFAS. Radiolysis of water and other compounds in the sample creates oxidising and reducing species that destroy PFAS

Arjun Venkatesan, an environmental chemist and engineer at Stony Brook University in New York, is working on another similar system. His team has also successfully degraded a wide range of PFAS, including short-chain compounds, using electron beam (e-beam) technology, in collaboration with the US Department of Energy’s Fermi Accelerator National Laboratory in Illinois.5 The powerful electron beam leads to radiolysis of water, producing species that can oxidise and reduce PFAS. This technique, which has been recognised as an effective water treatment tool for decades, does require an energy-hungry accelerator though.

‘Interestingly, we found that it was easier for us to break down long-chain PFAS compounds compared to the short-chain compounds,’ Venkatesan says. This is probably because the C–F bond energy increases as the chain length decreases, he says. ‘If you have a limited volume of highly concentrated water with PFAS, then e-beam could be a very optimal way of breaking them down.’

Meanwhile, Suzanne Witt, who is an electrochemist at the Fraunhofer Center Midwest in Michigan, has found that electrochemical degradation using boron-doped diamond (BDD) electrodes can successfully treat PFAS-contaminated water.6 This process, currently being tested in the lab, transforms PFAS into carbon dioxide and and fluoride.

Diamond is a poor electrical conductor normally, but introducing boron into its structure enables a current to be passed through the material that can break C–F bonds. ‘We’re getting electrons to flow, and the PFAS molecules will come to the surface of the BDD electrode and lose electrons or be oxidised,’ Witt explains. Her experiments have shown that this technology generally achieves about 90% degradation of total PFAS in about eight hours.

At the same time, Diana Aga, an environmental and analytical chemist at the University of Buffalo in New York, is working with colleagues at her institution and the University of Pittsburgh to develop catalytic, carbon–metal nanomaterials that react with PFAS. They are also trying to combine these catalytic materials with microbes that will eat the resulting compounds.

Aga and her team have used functionalised graphene oxide, along with iron or manganese, and are finding that they partially degrade PFAS to forms that are more biodegradable. ‘We’re trying to convert these fully fluorinated carbons into partially fluorinated carbons, and then feed them to microorganisms that will complete the degradation process,’ Aga explains.

It’s still early days, but there are reasons to be hopeful. ‘Some of the bacteria that we’re targeting have been shown to degrade carbon–chloride bonds, like tetrachloroethylene groundwater contaminants,’ Aga notes. Although the C–F bond is stronger, Aga and her colleagues are hoping that microorganisms that can break down C–Cl bonds can also degrade C–F ones.

Two US companies have also joined forces to engineer biological solutions to break down PFAS – Aether Biomachines and Allonnia. This partnership’s goal is to develop enzymes that can remove PFAS from the soil, groundwater and drinking water.

‘When we figure this out, it will be the first technology that you can add in situ to degrade PFAS – currently you have to wait for the contaminated soil to get into groundwater to then treat the groundwater, which is not ideal,’ explains Allonnia’s chief executive, Nicole Richards. A chemical engineer by training, she notes that current soil PFAS remediation technologies are expensive and inefficient, and right now there is no cost-effective way to treat groundwater contaminated with PFAS.

Aether chief executive Pavle Jeremic, who has a biomolecular engineering background, recalls his surprise when his team kept coming across enzymes that seemed to dechlorinate various compounds. ‘We had not been anticipating that this would occur, but a lot of our chemical library have halogens attached – there are bromines, fluorines, chlorines – and we kept seeing this pattern of fluorinases existing that no one else knew about,’ he explains.

Allonnia announced earlier this month that it has discovered a protein that can detect how much PFAS is in a water sample, down to parts per trillion, and has a patent pending for this field deployable PFAS biosensor. The company hopes to test this technology in the field by the end of the year.

Meanwhile, Allonnia is also in the process of bringing to market its new surface active foam fractionation technology, which separates and concentrates PFAS compounds and gets them to below detectable limits in contaminated water. And now, the company’s work with Aether on a biological degradation solution is intended to supplement these efforts.

‘We’re looking at it holistically and from the deployment standpoint, and if there needs to be a chassis organism to put the enzyme in, we’ll also develop that,’ Richards tells Chemistry World. ‘But the unique enzyme that’s going to defluorinate the perfluorinated compound, which is a really tough order, is what Aether is working on.’

Aether is in the process of screening different designed and natural enzymes against large panels of PFAS compounds. ‘We have some exciting results that I’m going to be quiet about for now, because they still need to go through tier validation,’ Jeremic says. He notes that his company is on track to deliver an enzyme that works on PFOA and PFOS by the end of the year.

‘All hands on deck’ 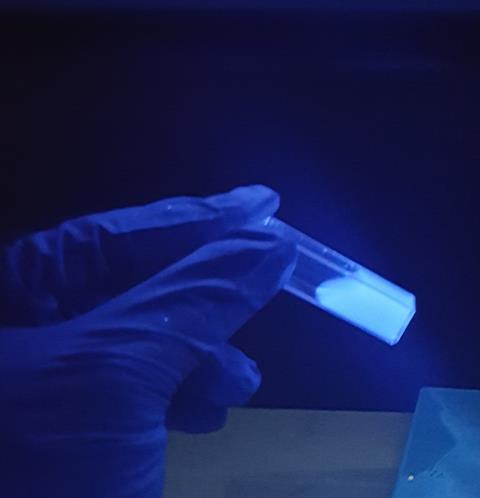 Other materials that hold promise for cleaning up PFAS include metal-organic frameworks (MOFs) – a class of crystalline materials with ultrahigh porosity. A team led by Rice University’s Wong has found that when you engineer nanometre-sized holes in one MOF, it soaks up PFOS from polluted water faster than the benchmark material, activated carbon. The engineered nanomaterial also holds more PFOS.7

Experts agree that an ‘all hands on deck’ approach is required to address the world’s PFAS pollution problem. Many advocate a ‘treatment train’ approach that involves combining technologies, such as methods to remove PFAS from solution and destructive tools that can focus on a smaller volume of these concentrated chemicals.

But significant obstacles remain, and more technology development is desperately needed because of a question mark surrounding all of the available and emerging technologies. Namely, it is unclear whether they completely eliminate these harmful molecules, and there are transformation products that still need to be identified.

Currently, no adequate technology exists to ensure that the methods scientists are creating to treat PFAS don’t unintentionally turn them into something else that is toxic. Industry phased out legacy long-chain PFAS such as PFOS and PFOA decades ago amid growing toxicity and bioaccumulation data. However, the short-chain analogues that were created as alternatives have similar solubility, mobility and persistence in water as their predecessors, and some have even shown comparable toxicity as well. And in some ways they are even harder to destroy.

But the rate of technology development and maturation in this field has accelerated significantly in the last year or two. ‘Each of these technologies will find its space in the market,’ Dan Longbrake, who directs Battelle’s environmental commercial business, tells Chemistry World. ‘We really operate under the principle that a rising tide raises all boats,’ he adds. ‘We’re very interested in collaborating with other technology providers because we believe that we can all help each other improve and address the PFAS problem.’