Findings suggest that regulatory monitoring may be required 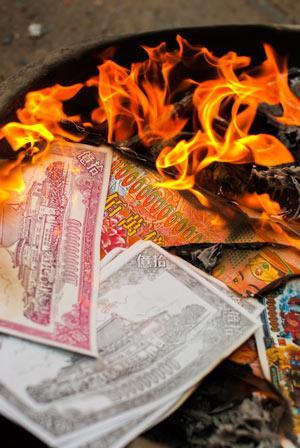 Paper offerings, including hell bank notes, are burnt during the Hungry Ghost festival

Researchers in Singapore have linked late-summer spikes in air and rainwater pollution with incense and paper offerings being burnt during local celebrations of the Hungry Ghost festival.

During the month-long festival, when deceased relatives are believed to return to their families, colourful joss paper and ‘hell bank notes’ are burned as gifts for the visiting ancestors to take back to the underworld. However, the effect of the smoke and ash left behind by the widespread burning on the elemental composition of particulate matter in the air and water had not been investigated until now.

Richard Webster, at Nanyang Technological University, and colleagues analysed air particulate matter and water data over a five year period and found that concentrations of metallic elements rose by 18–60% around the time of the festival. Further experiments confirmed that the same elements were present in both unburnt and burnt incense and joss paper.

The group recommend further investigation into the environmental impacts of the Hungry Ghost festival. They also recommend ways to limit the pollution while still keeping the spirit of the festival, including burning in closed and filtered furnaces and using more environmentally-friendly materials to produce joss paper and incense.