Concerted quantum tunnelling has been observed in a macrocyclic molecule by a research team from Germany, Poland and the UK.

Most chemical transformations have an energy barrier that must be overcome for reactants to turn into products. Like a car that has to travel over a hill to get to its destination – if the car isn’t travelling fast enough, it won’t make it over the hill. But for very small particles with very little mass, such as hydrogen, there is a shortcut – they move right through the energy barrier as if it weren’t there, in a process called tunnelling. 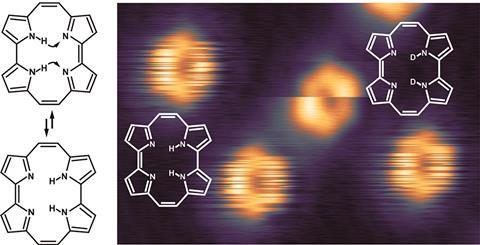 The hydrogens tunnel back and forth together between opposite sides of the porphycene macrocycle, which causes the molecule to change its position on the surface. As the STM tip scans across the surface, the molecule’s movement gives rise to the stripes in the image.

Takashi Kumagai from the Fritz Haber Institute in Berlin, Germany, and colleagues managed to get snapshots of two hydrogen atoms tunnelling together from one side of a porphycene molecule to the other during tautomerisation. ‘It’s a nice fundamental piece of work,’ comments Peter Liljeroth, who leads the atomic scale physics group at Aalto University, Finland. ‘If you want to use a reaction for something you need to know how it really works.’

The porphycene was deposited on a silver surface and the surface then studied using a scanning tunnelling microscope (STM). The images look as though they are displayed on a flickering screen, but what looks like faulty equipment is actually caused by the porphycene moving slightly on the surface as the hydrogen atoms tunnel back and forth while the microscope’s tip scans over the molecule. The process proceeds at a constant rate, independent of temperature – proof that the hydrogen atoms tunnel, says Kumagai.

‘[This] is a well-known phenomenon in the gas phase, but it is not clear whether hydrogen tunnelling can still occur when the molecule is adsorbed on the surface, especially when multiple hydrogens are involved,’ comments Ying Jiang from Peking University, China, who works on STM imaging of single molecules.

‘Such tunnelling processes on surfaces can be used to design single molecules devices,’ STM researcher Aparna Deshpande from the Indian Institute of Science Education and Research in Pune, India, tells Chemistry World. Liljeroth agrees that ‘this tautomerisation is a nice example of something that could potentially become a molecular switch’.

However, practical applications are still a long way off. ‘We won’t build a molecular computer in a beaker anytime soon,’ Liljeroth concludes.