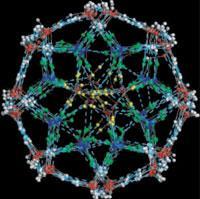 At this time of year there are reminders everywhere of the beautiful structures that water can form when it freezes. But the ice crystals predicted in computer simulations by Xiao Cheng Zeng and colleagues at the University of Nebraska, Lincoln, US, are as striking as any snowflake.1 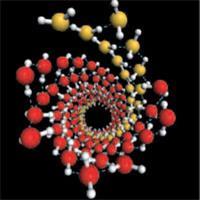 The patterns are formed from water freezes under high pressure inside carbon nanotubes. The small width and hydrophobic walls of nanotubes place severe constraints on the hydrogen-bonded network of ice, forcing it to adapt in novel ways. So far, several unusual forms of ’tubular’ ice have been identified inside nanotubes at atmospheric pressure. But since ordinary ice undergoes transformations to complex, denser network structures when compressed, Zeng and colleagues suspected that squeezing ice inside a nanotube - as though between pistons placed at each end - might produce interesting new variants.

They conducted simulations for four nanotubes with diameters of between 1.35 and 1.9 nanometres, and with different helical windings of the rows of carbon hexagons in the tubes’ wall. Six distinct phases of ’nano-ice’ appeared at pressures of up to four billion Pascals (4 GPa, or 40,000 atmospheres). 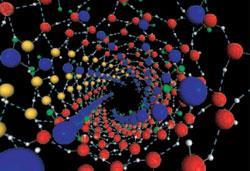 In general, the water molecules arranged themselves into concentric shells, with hydrogen bonds holding together the molecules in each shell. Some of these had helical structures: one consisted of two helical shells, the innermost being a helix of four hydrogen-bonded strands and the outermost a series of four double-helical strands.

The largest nanotube studied was wide enough to accommodate a triple-shelled ice structure, with the outer shell having 18 helical strands and the inner two shells comprised of 6 strands each. 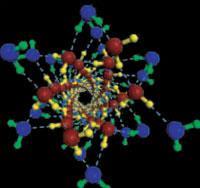 With so many new phases from just a small number of confining geometries, it is tempting to conclude that ice may adjust itself in a unique way to just about any nano-environment, rather than simply freezing into the bulk solid as, for example, metals seem to do inside nanotubes. An even more enticing question is whether liquid water might also exhibit some unusual structures in nanotubes - although simulations have suggested that it would, there’s no firm experimental evidence for it yet.