Industrial nitroglycerin made fast and safe 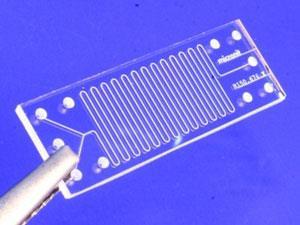 Since the invention of nitroglycerine in the mid nineteenth century, people have been trying to find safer ways to manufacture the highly unstable liquid explosive. Now, researchers at the Fraunhofer Institute for Chemical Technology (ICT) in Pfintzal, Germany, have come up with what might be the safest approach yet – using microreactors to produce nitroglycerine continuously rather than in batches. This is not only safer but also quicker, facilitating a tenfold increase in production rate.

Nitrogylcerine is made by adding glycerol, a simple hydrocarbon with three hydroxyl groups, to a mixture of sulfuric acid and nitric acid. The reaction is extremely exothermic, but if the temperature gets too high – somewhere above 30°C for example – ‘runaway’ can occur, increasing dramatically the risk of explosion.

Therefore manufacturers continually cool the reaction mixture and – in the traditional batch process – add the glycerol drop-by-drop to the acid to give time for the heat to dissipate and maintain an excess of acid, essential to ensure complete nitration of the all the hydroxyl groups.

‘This is quite old fashioned chemistry,’ says Stefan Löbbecke, deputy director for explosive materials at the Fraunhofer ICT. Switching to a continuous process in a microreactor means working with much smaller quantities – safer for several reasons. It makes it is easier to control the overall temperature and the degree of mixing, which is important to avoid localised temperature variations and dangerous ‘hotspots’. It also makes it easier to control the decomposition products. And in the event of something going very wrong, the resulting explosion would be much smaller.

The microreactor is a hand-sized clear polymer tile with an internal channel that meanders across the plane. The internal channel has two entrances but only one exit – the reactants are brought together at the start and then mixed as they move through the microreactor by turbulence caused by a complex pattern of grooves and ridges on the sides of the channel.
To scale up production, you simply add more microreactors in parallel. A single microreactor might be used to make 10-50kg  of nitroglycerine per day, says Löbbecke. But his group has experimented with production at 2-3 tonnes per week by ‘numbering up’ the microreactors.

That said, this is not an approach for bulk production of nitroglycerine. Low grade product, primarily for the mining and construction industries, can be made cheaply in bulk already. Where this approach is a real advantage, says Löbbecke, is in the manufacture of smaller quantities of nitroglycerine, and other nitric esters, at very high grades for use in the pharmaceutical industry. Nitroglycerine is not only a powerful explosive but also a potent drug (sometimes called glyceryl trinitrate), widely used for treating angina and other heart problems.

The improved safety of the approach reduces costs for the manufacturer, as does the higher rate of production. The microreactor approach is already in use industrially, although Löbbecke declined to say where owing to commercial sensitivities.