Chinese researchers have reported a cheap and effective way to print nanoscale structures onto surfaces: they use stamps created from the delicately patterned wings of cicadas.

Jin Zhang, Zhongfan Liu, and colleagues from Peking University, Beijing, took inspiration from the natural world to invent their nanolithography technique, which could produce materials with useful light-scattering or water-repelling properties. 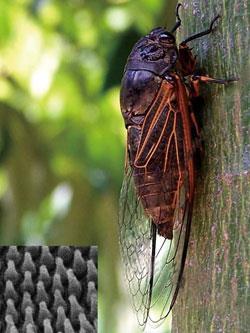 As Zhang explained, cicada wings - removed from insects caught in the backyard of his research institute - contain a microscopic structure of pillars some hundreds of nanometres apart. The cicada uses the light-reflecting properties of this nanostructure to evade predators, Zhang told Chemistry World.

Luckily, cicada wings are also stiff enough for their nanoscale pattern to be imprinted into a smooth polymer film. With suitable chemical etching, the pattern can be recreated on a silicon wafer; or the imprinted film can stamp a copy of the cicada-wing pattern onto gold.

The cicada wing’s waxy coating makes this possible: it preserves the wing structure as it is cleaned, and it allows the wing stamps to be cleanly peeled away after the printing process.

Zhang reasoned that cicada-inspired nanosurfaces could be used in precision lenses, where light-reflecting properties are important. ’This technique is a powerful demonstration of how natural nanostructures existing in the environment can be used to pattern microscopic structures not easily accessible by conventional microfabrication technology,’ he said.

The field of nanolithography currently relies on sophisticated - but expensive - methods to pattern surfaces, commented Franco Cacialli of University College, London, UK. ’The bread-and-butter technology is optical lithography, which uses photosensitive materials,’ said Cacialli. But a myriad of other techniques are being pressed into service to design smaller, customised patterns; all with varying degrees of cost, speed, and complication.

The cicada-wing approach scores on cheapness and simplicity and could produce stamps covering a large area. But it can only produce one pattern, said Cacialli. Focused ion beam lithography, though more expensive, can chip away any required pattern in a silicon wafer.

Cicadas are not the only insects with nanostructures on their wings. In nature, the researchers explained, patterns on the nanometre scale abound: butterflies’ iridescent colours arise from tiny pillared structures which scatter light; lotus plants repel water because of nanometre-sized wax crystals on their surface. ’There is a lot that nature can teach us about nanotechnology,’ said Liu.

Philip Ball sizes up the latest developments in nanotechnology.